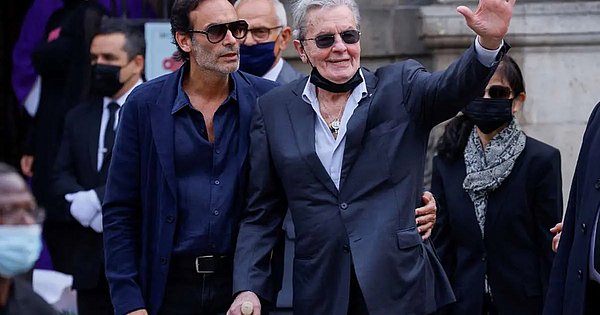 Alain Delon’s youngest son has denied that his father has any intention of resorting to assisted suicide. In a post published on his Instagram account, Alain Fabien Delon asked them to let his father “live in peace” and threatened to take the case to court if the press continues to address the matter. Three weeks ago, the actor’s other son, Anthony, told reporters that his father had asked him to help him with an assisted suicide procedure in the near future. On March 25, a post published on the actor’s Instagram account brought a message interpreted by the press and his fans as a farewell. “I would like to thank everyone who has followed me over the years and given me great support. I hope that future actors can find in me an example not only in the field of work, but in everyday life between victories and defeats. Thank you, Alain Delon”, read the post, which was soon taken down. According to Fabien Delon, the father did not ask his children for help with an assisted suicide. For him, what happened was a misinterpretation of an excerpt from the actor’s autobiography. “One sentence from a book taken out of context is responsible for this,” he said, referring to a passage in which Delon says that if he is ever connected to a machine, he would like his children to turn it off. “This has already happened and we didn’t do it, on the contrary, we chose to preserve his life”, said Fabien, who is a photographic model. “One thing is an excerpt from a book and another is the garbage you have published. Do you call it journalism? This is fake news”, he said, criticizing the work of the press. “Let my old man live in peace,” the post concludes.

See also  Hellbound is Netflix’s Most-Watched TV Shows
Share
Facebook
Twitter
Pinterest
WhatsApp
Previous articleThe Mercadona product that removes the bad smell from our washing machine and leaves it like the first day
Next article“They came and did what they wanted”: the reckless behavior of Russian soldiers exposed to radiation in Chernobyl
suddz
Sudeshna is an engineering in making but has is keen towards writing blogs, news articles, product reviews and more. You would find her making use of the pen and paper in her free time.
RELATED ARTICLES
Entertainment