Without Ronaldo, United are thrashed by City in de Bruyne’s derby 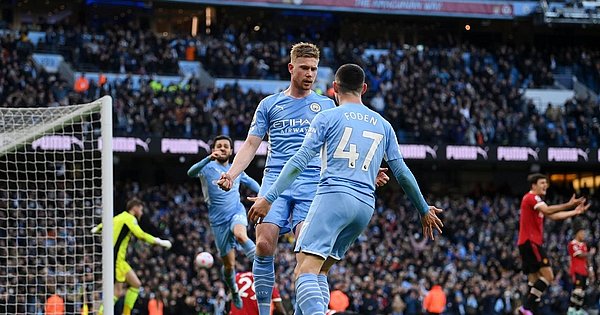 Without Cristiano Ronaldo, injured, Manchester United was thrashed 4-1 by Manchester City, in a classic starring Kevin De Bruyne, this Sunday (6), at the Etihad Stadium. The victory, valid for the 28th round of the Premier League, had two goals and two assists from the Belgian star, in addition to two other balls placed in the net by Mahrez. The Old Trafford team’s only goal was scored by Sancho. The team led by Pep Guardiola thus achieved their second straight triumph in the derby, as they had already beaten their rivals 2-0 in the first round. In addition to the joy in the rivalry, the team celebrates the 69th point conquered in the national league, in which it occupies the leadership, six points ahead of the vice-leader Liverpool. United, in turn, are in fifth place, with 47 points, pushed down by Arsenal, now fourth, with 48The absence of Cristiano Ronaldo among those related generated speculation, since, at first, United did not explain the reason. A few hours before the game, however, coach Ralf Rangnick clarified that the Portuguese was banned by the medical department because he has a problem with his hip flexor. As he did not have the team’s star, Rangnick promoted the return of Jadon Sancho, a reserve in goalless draw with Watford last weekend, to the starting lineup. The Uruguayan Edinson Cavani, who could be an option, continues to recover from an injury and was also not included for the match. Facing the rival without Cristiano Ronaldo, after a bad performance in the previous round, already drew a very discouraging scenario for fans of United, which withered even more after four minutes of play, when De Bruyne received a low cross from Bernardo Silva and hit it with the first shot, from the middle of the area, to open the scoring. went in search of a tie and gave space to the opponent. So, after good interventions by Ederson, in an attempt by fellow countryman Fred, and by De Gea, after another shot by De Bruyne, United found the way to an equalizer. The goal came from Sancho’s feet, who took advantage of Pogba’s great long pass, opened space near the edge of the area and hit Ederson’s left corner, in the 21st minute. Only six minutes later, however, De Bruyne was left with two attempts at finishing, one by Foden and one by Grealish, and put City ahead once again. The 2-1 continued until the break. On the return to the second half, the signs that City would add more numbers to the marker were strong, as Guardiola’s men continued to play an intense game offensively. The attacks didn’t always end in good finishes, but between one shot and another, it was time for the third goal. In the 22nd minute, De Bruyne took a corner at the edge of the area, in a rehearsed move, and Mahrez came from behind to hit and score a nice goal. From there, City took control of the match and swallowed the rival, even creating chances to turn the score into a rout, which materialized in stoppage time with a goal by Mahrez, canceled at first, for offside, but validated. by VAR. United seeks recovery next Saturday, when they receive Tottenham at Old Trafford, for the 28th round, from 14:30. City, in turn, focuses on the Champions League, a competition for which they play on Wednesday, against Sporting, at the Etihad Stadium, in a game valid for the second round of the round of 16. In the first game, they won 5-0.

See also  Zoey's Extraordinary Christmas: What Are The Major Updates
Share
Facebook
Twitter
Pinterest
WhatsApp
Previous articleWhatsApp gives the green light to a big change: it confirms that it will allow one of the things that users ask for the most
Next articleHMD Global abandons the race for flagships
suddz
Sudeshna is an engineering in making but has is keen towards writing blogs, news articles, product reviews and more. You would find her making use of the pen and paper in her free time.
RELATED ARTICLES
Entertainment