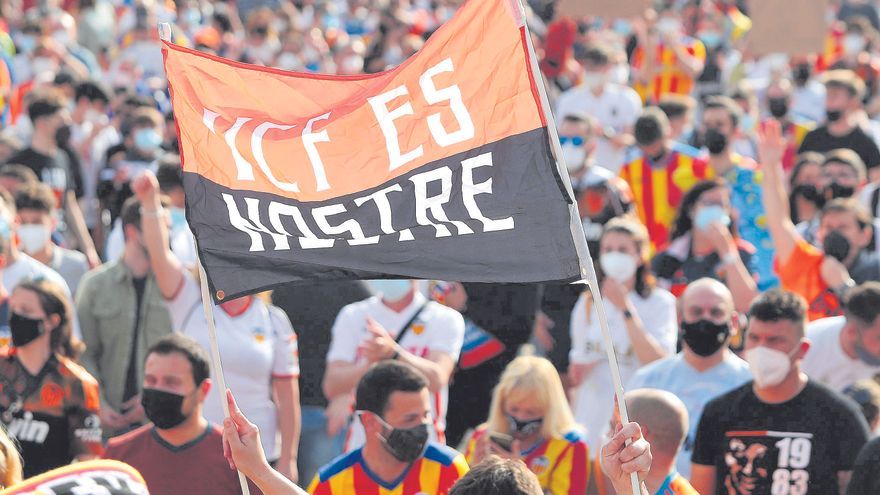 More vertebrate, mature and united than ever, Valencianism seeks to deliver the coup de grâce. Loaded with reasons and with experience in the bag, the fans go to their third major event with the intention that it will appear forever in the history books. Recovering Valencia CF is a matter of honour, pride and self-respect. Also of safeguarding the legacy left by past generations and having one to leave to those to come. A protest will take place today on Sweden Avenue which, due to its visual impact, commitment and forcefulness, should go around the world and shake Peter Lim’s ‘armchair’ in such a way that it moves him to accelerate the processes to head for the door of exit. Valencianism already brought together 8,000 people in its first attempt. Still coming out of the pandemic, the follow-up numbers were very good considering the socio-health context. The mobilization even forced Valencia to issue a statement in which they opened the door to reflection, although nothing really changed. The second, in December, brought together around 15,000 people according to the police and something more according to the convening platforms. Among them were relevant personalities such as actors, singers or soccer players. Now, in the third attempt, Valencians want to teach a lesson by surpassing the previous figures. The challenge is ambitious because they compete against nothing more and nothing less than the League match, but that is why achieving the image of the surrounding area full and the stadium half empty would be invaluable and have enough potential to go around the world.

The fans have long said ‘enough’. The club is going through very low hours because of Meriton’s management. The last annual accounts showed a limit situation at an economic level, having to save the cause of dissolution. Valencianism, moreover, will have to resign itself to watching Europe on TV for one more season and this summer they will have to put up with seeing several of their idols posing with other shirts while the person in charge of signing to fill their void is Anil Murthy accompanied by a sports director without autonomy and whom he himself ‘none’, as revealed by the conversations published by this newspaper. And to this sporting and economic drift we must add the social one, since Valencianism has never felt further away from its club, which has been without being able to comment on social networks for more than a year. Meriton does nothing to take care of its people, whom it disrespected in matters as special as the distribution of tickets for the Copa del Rey final and even maintains the president who had the audacity to silence Mestalla and who privately he boasts of not respecting the Valencian political representatives in such a delicate matter as the stadium. The events of the last week, moreover, have stirred up the hornet’s nest. Some of Murthy’s words in the audios have greatly outraged the fans and the achievements of Libertad VCF in judicial matters have lit the fuse, achieving the admission of the criminal complaint against the Council and requesting the figure of a representative of the hobby in it.