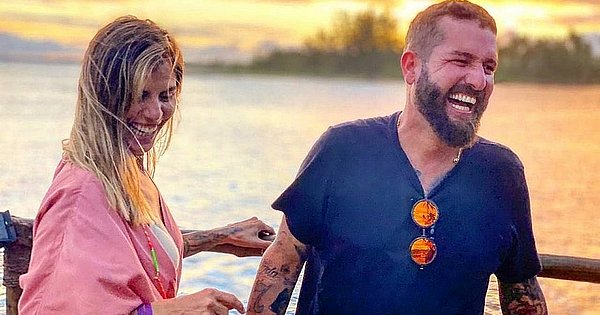 If the police had reason to suspect the involvement of businesswoman and ex-convict Shirley da Silva Figueredo in her husband’s death, it is now that her situation has become even more complicated. That’s because, the place where the body of Leandro Silva Troesch was with a shot in the head, was violated by three people at the behest of the widow. They entered one of the rooms at the luxurious Pousada Paraíso Perdido, in Jaguaripe, in the Recôncavo, and took a certain amount of money, jewelry and documents that were in a safe. O businessman and also ex-inmate Leandro was found lifeless in one of the rooms on his property on the 25th. Since then, the site was isolated, as it would undergo a second examination. “But to my surprise, the place was moved. We learned that three people at Shirley’s request went to the site and took what they could from the safe. They left with some boxes”, reported police chief Rafael Magalhães, head of the Jaguaripe Police Station, without giving further details about those being investigated. Shirley has been missing since her husband’s death. However, the police already know the whereabouts of her and her friend, and also ex-inmate Maqueila Santos Bastos, pivot of the couple’s discussions – Leandro could not stand the approach of the two and even expelled Maqueila from the inn and ten days later he was found dead. But the mystery doesn’t stop there. The land employee and ex-convict Marcel Silva, Bili, was murdered on the day he was to testify about the boss’s death. He was considered a key witness in the case, as Leandro’s trusted person. At least four people who would be involved in this crime have already been identified.. Police are still not sure that the two deaths are directly linked. Friends since childhood in the Boca do Rio neighborhood of Salvador, the two meet again years later at the Mata Escura Penitentiary Complex, when Leandro was arrested last year, along with Shirley for kidnapping and extorting a woman in Salvador in 2001. Delegate Rafael also said that Shirley’s and Leandro’s cell phones were examined by the Salvador Technical Police Department. “I will take her device in for forensic examination on Monday. She gave it to the sheriff the first time she was heard and then disappeared. Leandro’s cell phone was collected on the same day that his body was taken to the DPT. As the device has a password, a specific expertise will be carried out to unlock it”, pointed out the delegate. Magalhães also said that images from the cameras were also part of the investigation into Leandro’s death. “There are many recordings that have already been sent for forensics”, informed the authority.
Remember the couple’s crime
The CORREIO had access to information on the process that investigates the allegations against Leandro and Shirley. Another three people count as defendants. They are: Joel Costa Duarte, Carlos Alberto Gomes de Andrade and Júlio da Silva Santos. According to the court, Joel approached the victim on May 10, 2001, when she was parking her car outside her house, in the Itapuã neighborhood, around 6:30 pm. They took the victim’s vehicle and kept her in the car while cash withdrawals were made at ATMs. Upon checking the victim’s bank balance, Joel planned the extortion through kidnapping, leaving Júlio to keep her in private prison, first at the Motel Le Point, in Itapuã, then in a house located on Praia de Ipitanga, in Lauro de Freitas, Metropolitan Region of Salvador (RMS), rented to Joel himself and to two associates, in this case, Leandro and Shirley. redemption of R$ 35 thousand. In the process, it is stated that Leandro who drove the victim’s vehicle and made the looting. Shirley, on the other hand, was responsible for seeking the payment of the ransom. The weapons used in the crimes belonged to both Joel and Júlio, who managed to escape at the time. However, Leandro, Shirley and Carlos Alberto were caught red-handed. Later, the couple went on to answer for the crimes in freedom, until justice took a back seat in 2018.

See also  Bigg Boss 15: Full List of Contestants and What to Expect?
Share
Facebook
Twitter
Pinterest
WhatsApp
Previous articleThe metaverse and sustainability take the Madrid catwalk
Next articleYouTube expands its restrictions on Russian media globally
suddz
Sudeshna is an engineering in making but has is keen towards writing blogs, news articles, product reviews and more. You would find her making use of the pen and paper in her free time.
RELATED ARTICLES
Entertainment