‘We deserved to be the best team’, celebrates Agnaldo Liz 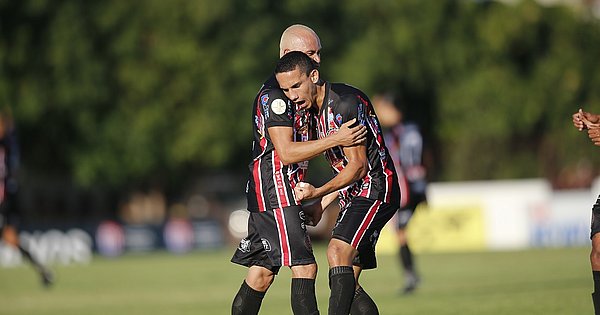 Atlético de Alagoinhas is Bahia’s two-time champion. Carcará won the second state title this Sunday (10), beat Jacuipense by 2×0, at Valfredão. The trophy is historic: it is the first time that a team from the interior has managed to win the cup of the tournament in two consecutive years. The feat was highly celebrated by coach Agnaldo Liz. After the match, the coach praised the group of players, in addition to the club’s project to guarantee another Baianão.

“We showed all our planning, the priority we gave to the competition, the respect we had for the opponent. We grew at the right moment. We worked for these two games, and we managed to be much better than the opponent in both. The individual team also stood out. We deserved to be the best team in the competition”, he said, in an interview with TVE.

“This title was for the fans. The second championship was what they wanted. Party in Alagoinhas, we’re going to get there with everything. Direct spot in the Northeast Cup, in the Brazil Cup”, he added. Atlético de Alagoinhas players show the Bahian champion medal
(Photo: Arisson Marinho/CORREIO) The score at Valfredão was opened by Thiaguinho, in the 14th minute of the first half. The striker also celebrated the title, and praised Carcará fans. “It’s very gratifying to see the joy of this crowd. Knowing that everything we’ve done was worth it. All the effort, all the dedication. We are so happy. Even happier to know that everything we fought for, we conquered”. Paulinho, on the other hand, was responsible for decreeing the 2×0, in the stoppage time of the final stage. The play began when Emerson was fouled in the area, and the referee awarded a penalty. Jerry charged, but Mota saved. The right side took the leftovers and stuffed the nets.

“Rewarding, the joy of reaching a final three times. Seeking a second championship with a team from the countryside, we know what we go through, it’s very painful to reach a final. And we reach three consecutive years. last year. It’s a huge joy, there’s no explanation. Just thank God himself”, said Paulinho.

Other highlights of the match were Dionisio and Miller. It was the farewell of the Atlético de Alagoinhas duo. This Monday (11), the players will perform at Vitória, with which they already have a pre-contract. “It’s an inexplicable feeling. Today, I’m ending a cycle at Atlético, and there’s nothing better than ending it this way, winning the second championship. Now we’re going to celebrate a lot. The feeling is unforgettable. What I experienced at Atlético, I didn’t experience anywhere. , from now on, God can continue to bless me, enlighten me, wherever I go”, affirmed Dionisio. The steering wheel took the opportunity to celebrate the partnership with Miller, which began many years ago. “Very good connection. We are from the same city, we were practically raised together. We started together in Itapetinga. Thank God, it’s working out. We hope to maintain, in Vitória, the same success that we had here, and that everything can work out for us”.

See also  Rayssa Leal reveals that F1 driver is a 'little bit' of Bufoni
Share
Facebook
Twitter
Pinterest
WhatsApp
Previous articleThe Ikea product that is most in demand thanks to its price reduction
Next articleGoal would be aiming to reach the resolution of the human eye in the Quest Pro
suddz
Sudeshna is an engineering in making but has is keen towards writing blogs, news articles, product reviews and more. You would find her making use of the pen and paper in her free time.
RELATED ARTICLES
Entertainment