Val’s speeches about Ukrainians are "unacceptable"says manager in Brazil 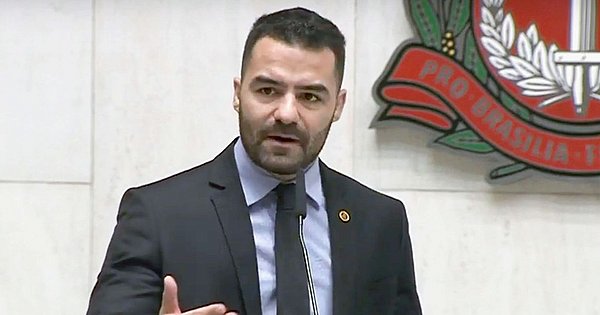 The chargé d’affaires of the Ukrainian embassy in Brazil, Anatoliy Tkach, said today that the comments made by state deputy Arthur do Val (Podemos-SP) regarding the Ukrainian women are “unacceptable”. In audios sent to friends released by the press yesterday, the parliamentarian said, among other attacks, that women in that country “are easy because they are poor”. Questioned by journalists this Saturday, the head of the Ukrainian embassy in Brasília preferred not to elaborate, but said that it will be up to Brazilian society to judge the parliamentarian. Earlier, Senator Humberto Costa (PT-PE), president of the Senate Human Rights Commission, stated that he wants to summon Deputy Arthur do Val after the offensive statements made against Ukrainian women.
Renounce
Deputy Arthur do Val (Podemos), known as Mamãe Falei, gave up his candidacy for the government of São Paulo, after the repercussion of the audios in which he spoke about Ukrainian women in the war. In a statement on his social networks, the parliamentarian says that his words are not correct “with Brazilian and Ukrainian women and with all the people who place trust” in his work. He also cited the project to build a third way in the national election, and later announced that he would withdraw his candidacy. “I’m not committed to the mistake. That’s why I got in touch with the president of Podemos, Renata Abreu, to withdraw my pre-candidacy for the government of São Paulo”, wrote the deputy.
audios
In the recordings sent to a WhatsApp group, Do Val comments on the customs officers. “Bro, I’m bad. I’m bad, I’m bad. I passed now, there are four customs barriers. There are two houses in each country. Bro, I swear to you, I told you: there were 12 goddess police. home and you do whatever she wants,” he said. He also said that the queue for the best nightclub in Brazil “does not come close” to the queue for refugees in Ukraine. Arthur do Val traveled to Ukraine, accompanied by MBL leader Renan dos Santos, to report on the conflict in Eastern Europe. During the last few days, the parliamentarian used social networks to share photos of the border and even published a photo in which he claims to be producing Molotov Cocktails for the Ukrainian army. The pre-candidate for the government also stated in the audios that Renan dos Santos, the MBL leader who accompanied him in Ukraine, often travels to Eastern Europe to “pick up blondes”. In the apology, the deputy said he was wrong and that Renan had never traveled to that region.

See also  Hanna Season 3 Release Date And Trailer Is Here!
Share
Facebook
Twitter
Pinterest
WhatsApp
Previous articleThe plant that you should place in the bathroom to prevent humidity and mold
Next articleAn update adds microtransactions to Gran Turismo 7 after the review period, up to $200 for a car
suddz
Sudeshna is an engineering in making but has is keen towards writing blogs, news articles, product reviews and more. You would find her making use of the pen and paper in her free time.
RELATED ARTICLES
Entertainment