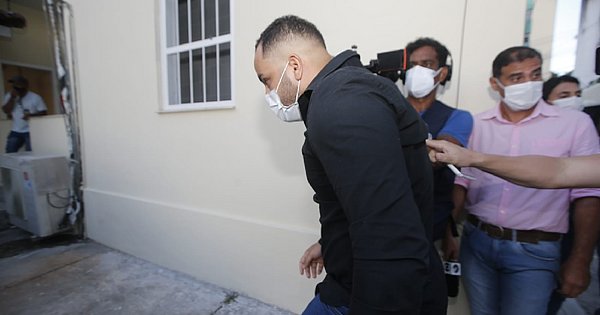 Two more suspects involved in the attack on the Bahia bus testified at the 6th police station in Brotas, on the afternoon of this Friday (24). One of them has been identified as Hugo Garotti, and is the owner of the white HB20 model car used in the escape after the attack. The other is Marcelino Neto, who would also have participated in the crime. Earlier, the president of Bamor, Half Silva, also provided clarification at the police station. He owns the other car used in the getaway, a Renault Duster Oroch in green color. half too was placed as a suspect in the crime by the Public Security Secretariat (SSP). Initially, the trio was heard individually by the slender Francineide Moura. Soon after, the three were together in the same room to answer questions. “Today the teams had access to the camera images of the place where the event occurred, and it was possible to identify two vehicles, a white Hyundai HB20 model and a green Renault Duster Oroch model. identify that one of the vehicles, the green one, is owned by the president of the Bamor fan group, and the HB20 is owned by a member of the same fan group”, says a statement from the PM. Suspected of an attack against Bahia, Marcelino Neto arrived at the police station accompanied by his lawyer (Photo: Arisson Marinho/CORREIO) The president of Bamor claims that he did not participate in the episode. Lawyer Otto Lopes, who represents the leader of the organized, said that Half was in Feira de Santana, accompanying the Coritiba fans in the game against Bahia de Feira, for the Copa do Brasil. His car was reportedly left at Bamor headquarters and was used by an unidentified person. In the images captured by security cameras on Bonocô Avenue, at least six people participate in the attack on the Bahia bus. In the video, they appear at one of the construction sites and throw explosive devices as the delegation passes by. Soon after, they split into two cars that are stopped in the middle of one of the lanes and flee the scene. Still on Thursday night, Bamor released a note denying involvement in the attack and asked for an investigation of the facts. “The Bamor Organized Fans come to the public to vehemently repudiate the acts of vandalism committed against the Esquadrão’s bus tonight. we reinforce our position of unconditional support to our reason for existing”, says an excerpt from the note.
Attack
The vehicle was hit, on Avenida Bonocô, as it arrived at the Fonte Nova Arena for the Northeast Cup game against the Sampaio Corrêa team. In the criminal action, goalkeeper Danilo Fernandes and left-back Matheus Bahia were injured. As far as is known, three bombs were dropped towards the vehicle. Danilo suffered injuries to his face and had to be rescued by an ambulance from Fonte Nova. He was taken to a hospital. His condition is not serious. Matheus was hit by shrapnel in his arm. A car that was passing alongside the tricolor bus, at the height of the last viaduct on Av. Bonocô, driven by a woman, was also hit by the explosion. She is doing well. The vehicle suffered damage and lost the rear window on the left side. In a statement, Arena Fonte Nova repudiated what had happened: “Arena Fonte Nova vehemently repudiates the attack on the Esporte Clube Bahia bus, this regrettable and reprehensible fact occurred when the bus was passing in the vicinity of the Brotas Metro Station, close to the Pitangueiras viaduct. Despite the fact that it took place outside the venue of the game, the Arena provided all the necessary assistance to the injured with the activation of the brigade and ambulance”. This is not the first time that the tricolor cast has suffered some kind of threat this year. In January, members of the organized crowd Bamor invaded the CT Evaristo de Macedo to charge the players, coaching staff and directors. As they were not authorized to enter, the board even registered a police report.

See also  You season 4 Release date, Cast, Plot and everything you should know
Share
Facebook
Twitter
Pinterest
WhatsApp
Previous articleThe protein drink you should drink every day to lose weight
Next articlePSG – Saint-Étienne, for the French league: Messi and Mbappé shine in the Parc des Princes
suddz
Sudeshna is an engineering in making but has is keen towards writing blogs, news articles, product reviews and more. You would find her making use of the pen and paper in her free time.
RELATED ARTICLES
Entertainment