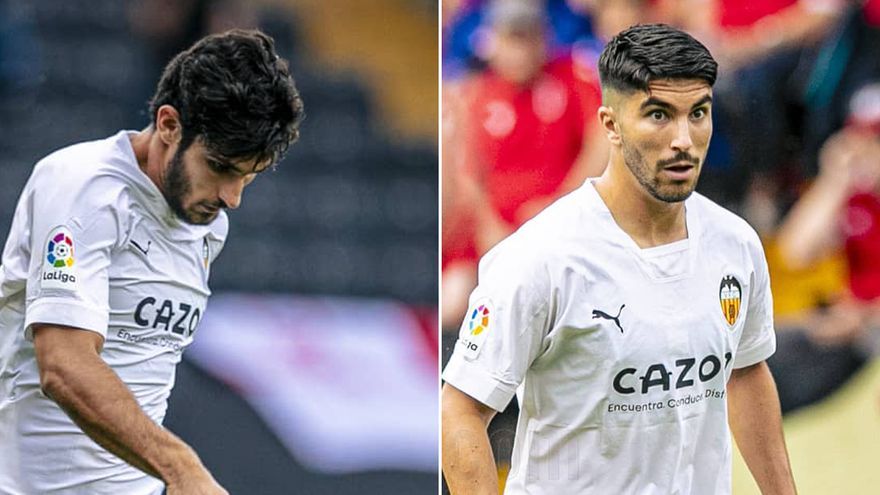 In the preseason of Valencia CF there is one thing that is obvious: the dependence of Carlos Soler and Gonçalo Guedes on the team is total. The market began with the sale of both already assumed, but as the days go by and no satisfactory offers arrive for them, Gennaro Gattuso has given them more weight in the games and it seems very difficult to imagine the team playing without them. The goal against Nottingham Forest could not have been a better reflection of what these two players bring to Valencia. Guedes is the main source of danger, he attacks spaces like no other and has the necessary determination to make a difference on the field. His good center left Soler alone, who in this scheme is even more capable of generating danger. He appeared alone at the far post and the definition was final. The Valencian feels free on trivote, he has more options to gain height on the field than when he plays double pivot and is associated with greater ease.

Players as decisive as them are scarce in LaLiga and of course there are none in the Valencia squad. Gattuso is establishing the core strength and the offensive strength of the team over them just two weeks before the start of the official league competition against Girona in Mestalla, so the threat that the club could lose them before the end of the month of August is very serious, since today it is the footballers who make the difference and shape the dynamic game that the Italian coach proposes. Beyond the two of them, the level gap between Unit ‘A’ and ‘B’ of the team is very importantthe squad cries out for signings in different parts of the field and combine all this with the idea of ​​losing the two most decisive players on the squad and without replacements of level within the economic possibilities of Valencia plunge into the capsizing the final stretch of the preparation phase. Cillessen does not travel and is preparing his departure from Valencia

The club still hasn’t sold anyone and its situation in the Financial Fair Play is really delicate. Without generating space in LaLiga’s economic control balances, Valencia will not be able to undertake the reinforcements it so badly needs… But it seems less and less clear that it needs them more than Soler and Guedes.