The sobriety of Otrura mixes with the brilliance of Custo 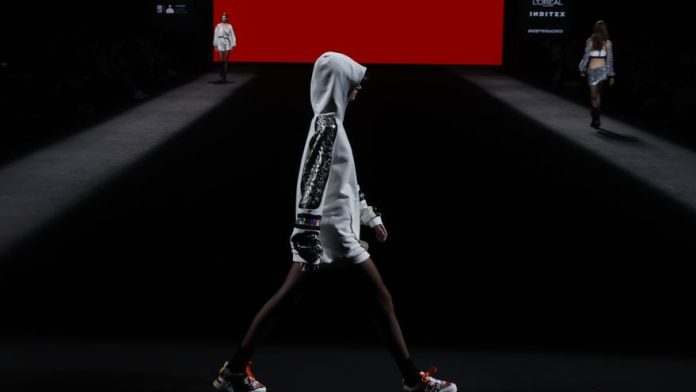 Opposites attract and fashion is not exempt. On the Madrid catwalk they have converged two excellent versions that place them thousands of kilometers aparton the one hand the night designs of Redondo Brand and the jovial glosses by Custo Barcelona and on the other the Otrura’s sobriety. The parades closed with pure party, as befits a Saturday night. Jorge Redondo, the creative soul of Redondo Brand, a firm that has worn the red carpet at the Goya Candela Peña awards and has won over Amaia Salamanca or Naty Abascal, has been inspired by another woman, Nan Kepner, the soul of the parties in New York for several decades and fashion icon. The designer, who is participating for the first time on the catwalk, has been the winner of the L’Orèal award for the best collection. He has commented that he has delved into the newspaper archives in search of her appearances to reinterpret her wardrobe. “I like his way of understanding fashion, his way of living it in a risky way at any age, without setting limits”, points out the designer. A woman who knew how to convey with her wardrobe, just what the creator intended. Despite her sophisticated proposal, Redondo opens her fashion show with a rustic dress in embroidered cotton on tulle, “90 percent of our fabrics are natural,” he says, a piece that he assembles with a cancan to give volume. Redondo Brand parade. EFE Volumes that move to the hip in skirts and that are made “important” in taffeta dresses. A pink bolero with burnt ostrich feathers is an accessory. It also leaves room for “wrapping pieces that embrace the silhouette” such as a knit dress with superimposed mohair flowers, another in red silk chiffon or a 50s-style gold lamé. In the same party line, Custo Barcelona has presented a collection for those women who “want to shine like before”, underlines the designer Custo Dalmau. Having just arrived from New York, where he has already presented this collection in an environment of great expectation, and about to leave for Los Angeles, to present it on the West Coast, Dalmau has the perception that “people want to turn the page“. “The machinery is running” and with the aim of not missing the train, presents proposals where dresses in two blocks, black and white win the game with asymmetrical cuts that show off an eternal shine with dazzling sequins. Custo Fashion Show Barcelona.EFE Shiny satins or velvet jacquards are the keys in which she mixes technological materials with cotton and wool to make garments that create “a emotional language“. Animal print on jackets, which also incorporate faux astrakhan lamé and lining, and long jumpers with mini jumpsuits contrast with pants that peel off the body. Completely abducted by Saturday night fever, with the Bee Gees’ final song included, Lola Casademunt by Maite has presented a proposal in which the ‘animal print’ in pink It has been the star in dresses, skirts and padding. Lola Casademunt parade. EFE

See also  The delicious vegetable that you can grow at home without the need for an orchard, garden or terrace

At the opposite pole, Otrura, a firm led by Sergio de Lázaro and Verónica Abián, expresses on its preparation of careful tailoring a reflection on the mental diseases and “how they transform the individual”. From then on, unstructured garments, which cling to the skin as much as they leave it uncovered, convey the sensation of suffocation and need to verbalize feelings to get out of a reinforced circular situation, “being the same person but different”, explains Lázaro. A mental suffocation that is reflected in the colors that range from a faded nude, chalk and earth, to black, denim and pale gold to finish with a dusty pink. the signature introduces leather, for the first time in a collection, in jackets and shirts, as a metaphor for the skin to show the interior without shame. With the same intention, the transparencies in blouses intend to exhibit the “most intimate feelings”. An image of the Otrura parade. EFE Pieces made for real women, any age, because -he argues- we must defend “the sensuality and sexuality of an anatomy through which time has passed, but continues to exist”. A contrasting work in which jacket patterns incorporate pleated bibs that play with the volumes and corduroy suits of short jackets and bell-bottom pants in a boiler color. The firm has also developed a stitching work, from a trousseau sheet, which they transform into a high-waisted skirt, with a lot of movement and an embroidered top with an original fold. Miriam Sáinz has been chosen by L’Oreal as the best model of a 75th edition that has regained joy, with one hundred percent capacity, an audience that, in some cases, forgets that the mask is still mandatory indoors.

Share
Facebook
Twitter
Pinterest
WhatsApp
Previous article“The point does not serve to hook us to Europe”
Next articleGuto values ​​Bahia’s change in attitude and aims for classification in Baianão
sonu
sonu is a content writer who had worked on various niches. And served many clients. He is a management student also interested in research and marketing. His hobby is writing, reading and sketching. He is also a good orator.
RELATED ARTICLES
Lifestyle