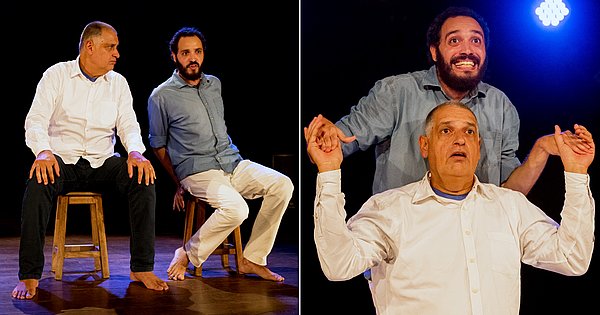 To watch ‘Foi Por Esse Amor’ is to go to the theater and come across your own story on stage. By narrating memories of a father and son, the play brings universal themes that inevitably intersect with the public’s memories, especially those from Bahia. A trick of sensitivity and affection sewn by narratives of characters from Salvador’s daily life and relationships, especially family members. A success among the public for three seasons, ‘Foi Por Esse Amor’ returns in a special presentation next Sunday (20), at 11 am, in the Domingo no TCA project, in the Main Room of the Castro Alves Theater. Tickets go on sale at 9 am on the day of the show at the theater box office. On stage, the experienced and award-winning actor João Guisande (Best Actor at the Braskem Theater Awards 2015 and 2018 and Best Actor at the Blumenau Festival 2013) plays with his father, Antônio Roque, retired colonel of the Bahia Military Police. The work brings the relationship between father and son in different circumstances. It tells of their love for Carnival, goes through the doubts and fears of childhood, youth and old age, through the rivalry in football – Antônio (Bahia) and João (Vitória) –, through songs that move them… ‘Foi Por Esse Amor’ puts on stage a PM colonel who, through his first experience as an actor, also talks about life after retirement. Softly, the audience is invited to remember, relive and recover their own family stories, valuing this unique affection. It’s love with a lot of humor. “I began to realize through my actor son, João Guisande, that the desire to act was already in my subconscious. The desire has always existed, but during my childhood and adolescence I didn’t have much space to think about that possibility. After becoming an adult and working as a soldier, even less,” says Antônio Roque. The idea of ​​transforming this first experience of the colonel in the theater universe is told in an exciting way in the show. Bringing the poetics of documentary theater, the show is also another project to continue the research of actor João Guisande. In it, João explores the field of memory, improvisation and storytelling. “We play with our memories on stage, with enthusiasm and humor we reveal our Bahianness through characters that are part of our family life and the city of Salvador.” The show premiered in October 2018, at Galpão Wilson Melo, in Salvador. There were eight performances with a full house. In 2019, “Foi Por Esse Amor” received the Braskem Theater Award in the best actor category (João Guisande) and also had its first international circulation. There were four cities in Portugal and five presentations, in addition to participation in the Fafencena Festival, in the city of Fafe, where they received the award for best show by popular vote. The play has text and direction by João Guisande, soundtrack by Ronei Jorge, lighting by Allison de Sá, costumes by Fernanda Beltrão and João Guisande. The graphic design is done by LadoB (Belmiro Neto and Pat Simplício). The presentation lasts one hour and the age rating is 12 years old.

See also  Overlord Season 4 Release Date, Cast and Plot Updates
Share
Facebook
Twitter
Pinterest
WhatsApp
Previous articleFun recipe: Learn how to make homemade sugar-free donuts, ideal for keeping fit
Next articleXbox Cloud Gaming receives support for the Steam Deck through Microsoft Edge
suddz
Sudeshna is an engineering in making but has is keen towards writing blogs, news articles, product reviews and more. You would find her making use of the pen and paper in her free time.
RELATED ARTICLES
Entertainment