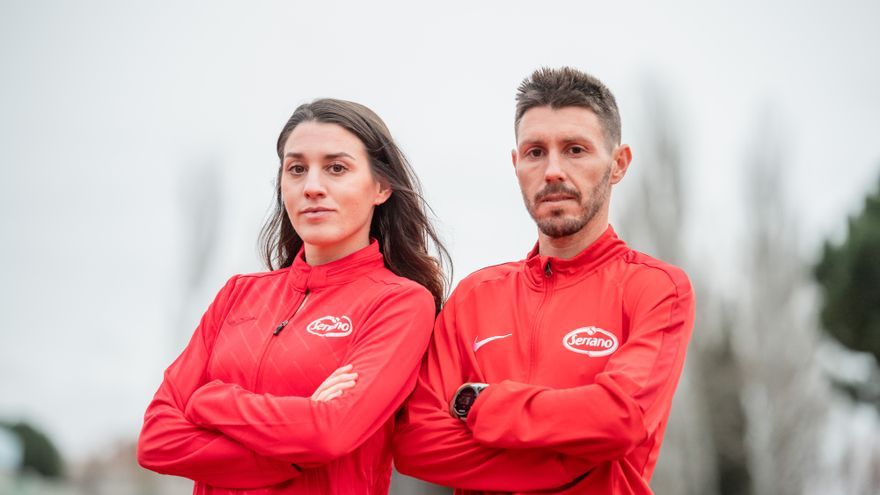 Paterna hosts this Sunday, June 19 (8:30 a.m.) the Absolute Spanish Championship and Half Marathon Master. A test that will be very special for the Pérez brothers, Chiki and María José. Both, members of the host club of the race, Cárnicas Serrano, are firm candidates to get on the podium. In fact, Juan Antonio ‘Chiki’ Pérez is one of the favorites to be crowned champion of Spain while in the women’s category his sister Maria Jose, Although he is not at his best after a long injury, he also aspires to get on the podium. “I’m going for the victory, for the gold”, Chiki does not hide, he wants to shine at home: “I am very motivated because the Championship is organized by my club and I want to give them a victory”, highlights the athlete from Ciudad Real, who has changed his plans to be in Paterna tomorrow: «I have just competed three weeks ago in the 10,000m European Cup and I am immersed in the preparation of the 10,000m of the European Championship.a. In fact, I was going to run the 5,000 in the Spanish Championship next week but I have decided to give it up to run the Half Marathon in Paterna.” Chiki and María José, during an SD training

Meanwhile, María José is also looking forward to the test: «I’m going to fight to get on the podium although the truth is that I’m short on kilometers, I’m coming off a very long injury, which has forced me to stop for six months. I am going to make up for it with the illusion of running in Paterna together with my teammates and my brother”, emphasizes the athlete from La Mancha, whose hernia caused sciatica from which she is recovering “Only the fact of being able to run and enjoy It is already a prize for me. If then a medal falls, great. Chiki Pérez, who has just lost 28 minutes in a 10k and who in 2019, in Valencia, became the second Spaniard who managed to lose 61 minutes in a half marathon (1:00:58), emphasizes that tomorrow the fundamental thing will be “Know how to dose forces. It will be a tough test, the circuit is complicated, with slopes and also the heat will be an added difficulty». María José, who did 1:12:57 in the Valencia Marathon 2020 She doesn’t expect big marks to be seen either: “In a way, it helps me that it’s a slow race because I’m lacking spark,” highlights the athlete who has just turned 30, for whom the support of her brother Chiki is essential: “it gives me a lot peace of mind knowing that he will also be in the race, although as soon as they give the starting gun, I won’t even see him anymore. But we’ll warm up together… it always cheers me up to have him by my side. Although he logically goes much faster than me, he often trains with me ». Chiki also highlights her good harmony with her sister: «the truth is that she supported me a lot in a bad time that I had and now that she has had a bad season with injuries, she has touched me. The truth is that I would be more excited if Sunday goes well for her than for me”, highlights the athlete from Serrano, who has a dream: “I would very much like to go to the next World Half Marathon (held in November in China) with my sister. If we make the podium now in the Spanish Championship and then we achieve the minimum in the Valencia Half Marathon, it would be great. We were already together in a European Cross. María José Pérez has already left her track stage behind: «My favorite event is the 3000 m. obstacles but now I am focusing on the route”, says the athlete from Serrano who hopes to make her debut in the 42k at the next Trinidad Alfonso Valencia Marathon: “I would like to although I still have a long way to go and a lot of work ahead”. Chiki Pérez, after staying out of Tokyo, wants to get even at a big international event and has a date marked in red: «my goal is to reach August 21 at full strength. It is when the 10,000 of the European Championship will be played, my great goal ».