The other challenges of the Nou Mestalla works 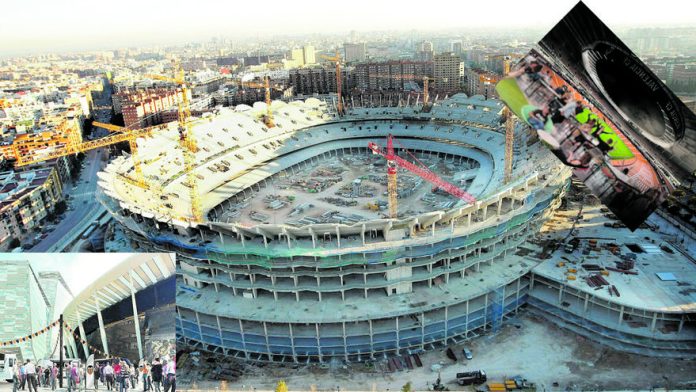 The resumption of the works of the New Mestalla is still in the preliminary phase of the political board, of the granting of permits and financial viability that guarantee that the work, stopped for thirteen years, is auctioned off with all the guarantees of a large-scale urban plan. The bureaucratic morass is the main stumbling block, but not the only one of a project with guidelines that fifteen years ago, when it was conceived, were beginning to be outdated and that must be updated to current trends in the construction of new stadiums and remodeling of existing venues . When it becomes a reality and the ball gets rolling in the Corts Valencianes stadium, Valencianism will have to deal with aspects such as the location of the stadium, the different structure of the stands, the capacity that brings the stadium closer to the idea of ​​a full that has repercussions on the sporting benefit and the generation of income, and finally the balanced coexistence between the environmental and commercial aspects.

Location of the Nou Mestalla

The Nou Mestalla enclave is the first challenge to not alter loyalty. For the first time since its founding as a club, Valencia will leave the area of ​​Avenida de Aragón. A peripheral location in the times of Algirós (1919-1923) and in the first decades of Mestalla, and which is now completely central and very urban. The current Mestalla is located in an area that can be reached on foot or in a short time by public transport for fans of the city of Valencia, and close to major roads for access by fans of the regions. The change of routines in the customs of the fans is an aspect that some clubs have taken into account in the creation of new stadiums, with the aim of not uprooting their social mass. This has happened in the transition from the old to the new San Mamés at Athletic Club, barely moved a few meters, or Arsenal, moved a few blocks from Highbury, in the same neighborhood in north London. Other top-level clubs, such as Real Madrid, Betis or various examples in the United Kingdom, such as Manchester United or Liverpool (which ruled out a new stadium), have been readapting their venues to new needs and technologies, without the need to move. In Mestalla, this possibility is ruled out since part of the extension at the end of the 1990s is illegal and, furthermore, one of the first proposals, by Bautista Soler, who devised building the new field in the barracks, was not contemplated, which would have meant the return to Algirós.

The structure of the stands, the bowl, is the other challenge. The current Mestalla is one of the most vertical stadiums in Europe. A slope caused by the succession of reforms on a closed urban space, which have given it a very high aspect (60 meters) and very vertical, with an extreme proximity of the stands to the field. With that layout it has earned a reputation for being one of the most intimidating courses in Europe. The structure of the Nou Mestalla, which did get up before the works stopped, is much less vertiginous and more open, designed for the greater comfort of the fans, but which will give the stadium a different appearance from the current Mestalla, less caged, which can affect the atmosphere of the field, with the addition that an entire ring will be used for restaurants. It was the first argument that squeaked Peter Lim when visiting the works, in contrast to the atmosphere of his first matches in Mestalla. Of course, with the successive redesigns, the athletics track has been eliminated, an obsolete concept that has forced Real Sociedad or Mallorca to rectify the initial proposals in the soulless Anoeta and Son Moix. In the first design by Juan Soler (2007), and in the one presented by Manuel Llorente (2012, which changed the steel cover for a glass one), the track was contemplated.

It has been one of the most criticized arguments in the details disclosed in the second Meriton project (the first was from 2017, with a textile cover): the reduction of the capacity of the Nou Mestalla to 46,000 spectators, less than the current capacity (49,300 ). Actually, it was the latest twist in a trend introduced by Amadeo Salvo in 2013, when he lowered capacity from 75,000 to 61,500. In 2017, the Meriton draft reduced the capacity to 55,000 and in the latest draft it drops to 46,000, expandable to 60,000. The objective is to adapt the capacity to the social reality of Valencianism. The 2007 design was conceived in the height of the post-double victory and with the perception, prevalent from Italia 90 to the first half of the 2000s, that the ‘gigantism’ of stadiums was synonymous with wealth and prosperity. Although some clubs socially comparable to Valencia have moderately increased their capacity (Atlético, from 55,000 to 68,500 from Calderón to Wanda, or Athletic from 40,000 to 53,289), Juventus was the pioneer club in rebuilding the old Delle Alpi, which went from 70,000 41,000 half-ticket seats and athletics track, with 83% full of matches and greater proximity to the field. A full stand, in addition to projecting the good sporting health of the project, can attract more sponsorships and increase the enthusiasm of the social mass: having a subscription or a ticket becomes a treasure. Bayern Munich settled the 25-year loan to build the Allianz Arena in 9 seasons, thanks in part to consecutive full houses in its new home. Although the experience of other stadiums indicates that landing in a new venue is accompanied by a boost of novelty in the first months and seasons, in Valencia, without the Anglo-Saxon component of religiosity in attendance, it should be accompanied by a guided fan for project expectations.

Share
Facebook
Twitter
Pinterest
WhatsApp
Previous articleAttacked by motojets. They shoot one of the leaders of Smata to steal his truck
Next articleHow to remove bad odors from the toilet with coffee grounds
mohit
I’m mohit, I am a professional blogger, Digital Marketer, and Certified Google Partner. I write about Business ,Tech News,Travel, Food Recipe, YouTube Trending Video and Health And Fitness here on cuopm
RELATED ARTICLES
Sports