The metaverse and sustainability take the Madrid catwalk 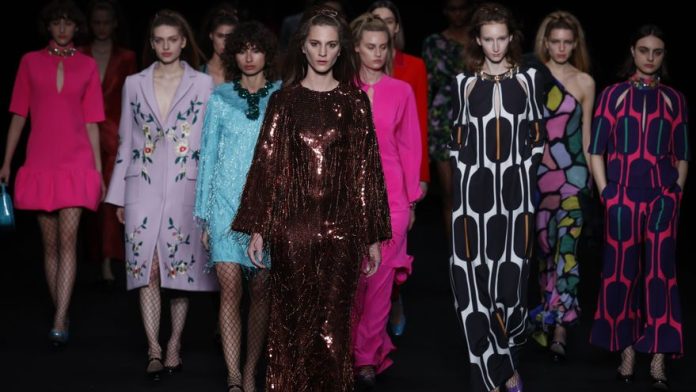 For various reasons, celebrating is the maxim coined by Dominico, Pertegaz and Pablo Errozwho have presented this Thursday on the Madrid catwalk inspiring proposals at a time when, despite the joy, the creators have remembered the war in ukraine. exultant, “excited and grateful” to the sector of the fashion by which he feels supported, Domingo Rodríguez Lázaro, Dominnico, has returned to the catwalk with pieces that have a double aspect, “some are more commercial and others more showy”.

The designer, who has dressed Rosalia, Lady Gaga or Rita Orapoints out that this is the first collection in which it includes genderless garments “something that has a lot to do with my generation and my community”, and for this it has adapted cuts and patterns in pants and jackets.

@Dominnico_brand’s proposal, impregnated with textures such as gummed that coexist with tweed, lamé, mesh with rhinestones, is full of silhouettes among which long trench coats stand out. #MBFWMadrid pic.twitter.com/ykHG9XtpBU— MBFWMadrid (@MBFWMadrid) March 10, 2022

Decontextualizing the usual clothing for sports such as motorcycling or skiing has allowed him to create powerful pieces such as the one that opened the parade: black and neon orange leather pants and jacket in which he has fused different techniques “that are already part of our DNA”, according to his words.

“I think the product has to go a little further,” dice, hence black occupies more space than in other collections. “We’re going from rockabilly to cyberpunk,” he says, taking it to the extreme in pink tweed jackets with big, pointed shoulders decorated with studs. A taffeta anorak typical of skiers is another of the highlights of the collection, with a parachute-style skirt, which covers one leg and leaves the other uncovered. The other axis of the Alicante designer’s proposal is the pieces made of lace, “which I always associated with my mother’s and grandmother’s wardrobe”, he comments, with which he has broken tradition in hyper-low-rise skirts in green, pink or blue . The designs of Manuel Pertegaz were the favorites of high society, Queen Sofia wore them and also celebrities like Jackie Kennedy, Ava Gardner or Audrey Hepburn.

This Thursday, the designer Jorge Vázquez, its creative director, shines again at the firm with the collection that now has clients as exclusive as Queen Letizia, Zendaya or Sharon Stone. And in this task of recovering its relevance, Jorge Vázquez has presented in the 75th edition of the “Diagonal 60” fashion show, a collection in which the Pertegaz prints are recovered, “they have all been reinterpreted”, says the designer, who assures that “there is a desire to show off prints, to make them more visible”. If in previous seasons the “lady look” reigned, this time mini dresses and skirts, capri pants, suit jackets prevail, an aesthetic inspired by the 60s, “when a woman starts to work, it is more modern,” recalls Vázquez. Flowing silhouettes and evasé patterns, in which a short dress with feathers and crystal fringes stands out, a nod to the dress Salomé wore in Eurovision. On the catwalk has stood out impeccable tailoring, colorful robes and playful jumpsuits, in addition to cloth coats embroidered or adorned with crystal stones on the neck and pocket, “they are very Jackie”, acknowledges the Galician designer who, as usual, embroiders evening and party dresses. The Minister of Culture and Sports, Miquel Iceta, has attended the Pablo Erroz parade, which celebrates its tenth anniversary in the world of fashion in this edition with an artisan work, in which he wants to reflect the traceability of each garment and its collaboration with local production.

Pablo Erroz celebrates his tenth anniversary at #MBFWMadrid, with his Non-Seasonal 22.23 collection, taking a journey through the brand’s DNA. The outer garment is the protagonist of this collection, added to the unisex, timeless garments, with purpose and discourse. pic.twitter.com/9Xkx9zjuv3— MBFWMadrid (@MBFWMadrid) March 10, 2022

In this case, with artisans from the island of La Palma to publicize how they make their silk, as well as with workshops in Mallorca, and thus “promote local products and techniques. I like to create synergies,” he stresses. Erroz leads one of the so-called “moral marks”, bearing in mind the circular economy, committed to the 2030 agenda and the sustainable development goals. With this collection, the Mallorcan designer fully enters the NFT, the metaverse of fashion, delving into the idea of ​​sustainability: “Some garments can only be purchased in the virtual universe.” Timeless and unisex pieces in natural colours, very clean cuts and a mix of textures make up a coherent collection with jackets in wool, cotton and linen.

See also  Alex Guarnaschelli Love Life All about the famous chef.
Share
Facebook
Twitter
Pinterest
WhatsApp
Previous articleSevilla, Barça and Atlético resume their struggle for the noble zone of LaLiga against a grown Madrid
Next articleWidow guided money and jewelry to be taken from safe after death of inn owner
sonu
sonu is a content writer who had worked on various niches. And served many clients. He is a management student also interested in research and marketing. His hobby is writing, reading and sketching. He is also a good orator.
RELATED ARTICLES
Lifestyle