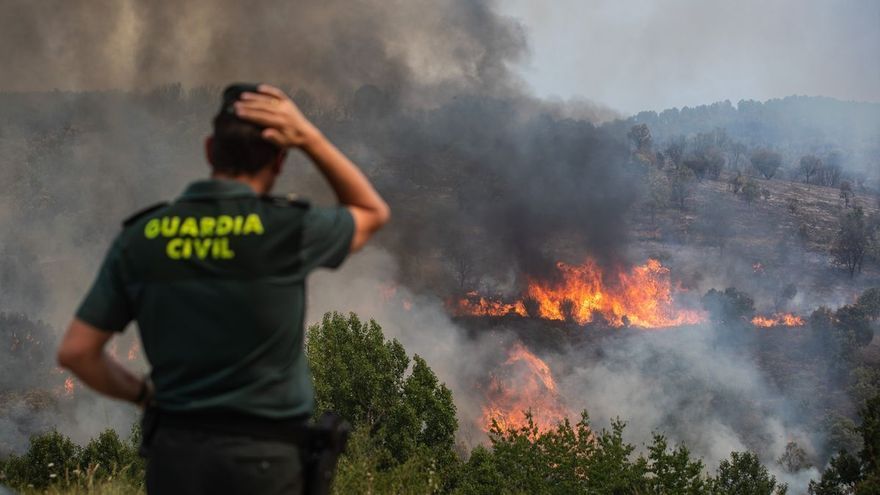 greenpeace has requested the Government of Spain “more decisive actions” against climate change. It is the NGO’s reaction to the energy saving and forest fire measures presented in the Council of Ministers. Among their demands, a national fire fighting strategy and actions leading to end of the use of fossil fuels and even energy system that prioritizes savings and efficiency. On the increase in heat waves and prolonged droughts due to the climate change –which aggravate and explain the evolution of the fires– Greenpeace demands “non-seasonal fire prevention policies“and highlights the need to have professionals who deal with forest management working throughout the year. “The increase in heat waves and prolonged droughts as a result of climate change explain the evolution of the fires but not their cause. For the fire to occur and spread, the causes of ignition and those of the state of our forests must be addressed” says Greenpeace. He states that landscape management is “one of the few strategic advantages” to prevent large catastrophic fires. “You cannot change the weather or the topography, factors on which the behavior of the fire depends, but you can modify the conditions of the fuel. And to maintain that landscape resilient to large forest fires, it is essential revitalize the rural environment and establish population in the territory, promoting sustainable activities of the towns“, Add.

“Large wildfires have become a national security environmental issue, the Government must guarantee the management of our ecosystems, forest masses that have been increased by the abandonment they are suffering. This makes them authentic powder kegs”, declares Mónica Parrilla, spokesperson for the Greenpeace Spain forest fire campaign. Forest fire in Losacio (Zamora). Emilio Fraile / La Opinion de Zamora The NGO admits that it agrees with the Government’s Strategic Guidelines, which indicate the objectives of managing the territory and reduce the risk of fire, as well as address a better coordination and increase of the firefighting services. It also applauds the measures and resources allocated to affected areas. But he warns that it is “fundamental” national strategy for the management of forest masses that allocates economic resources and guarantees “key measures” of the regional administrations to prevent high-intensity fires.

–Reduce ignitions. Forest fires are a social problem, 95% are caused by humans. It is essential to expand resources to investigate, prosecute and sentence the crime of forest fire and to address the causes and debates in rural areas about the traditional use of fire.

–Reduce risk of spread. With forest management and compliance with fire planning regulations. The Government proposes an update of the Forestry Law, but the current one does not comply with the obligation to have preventive plans in areas at high risk of forest fires, nor with the mandatory emergency plans in those areas. “Almost 80% of the mountains do not have local emergency plans and the preventive ones are only testimonial”, he denounces. “While there is talk of competition between the state and the autonomous community, the forests are burning. A national strategy is necessary for the management of our forest masses towards scenarios less vulnerable to fire”, concludes Mónica Parrilla.

“The energy saving measures are absolutely necessary and should have been adopted a long time ago”, underlines Greenpeace on the other hand, adding that saving energy is “the best way to avoid unnecessary gas consumptionwith whose purchase Russia’s war in Ukraine is being financed, but it is also essential for the fight against the climatic emergency”. Solar panels in a house. pixabay According to environmentalists, the government’s energy saving plan should be “much more ambitious ,” because “reducing fossil gas consumption by 7% is not, by far, enough“, he indicates. “Regulating the use of air conditioning and heating in buildings, setting the temperature at which the thermostat must be set, is a basic measure, but not the only one that must be taken,” he points out. He also considers that the plan of savings has been explained “very badly”, as if it were “an effort for the citizens, when saving energy, improving energy efficiency, means improving the quality of lifeavoiding waste and unnecessary consumption”. “The tie thing is an anecdote, which should not hide the debate on the need for more ambitious savings and efficiency goals”, according to José Luis García Ortega, head of the Climate, Energy and Mobility of Greenpeace Spain In his opinion, there is a need More ambitious measures to end dependence on fossil fuelswhich is “what is at the root of the crisis in energy prices and the climate emergency”.

Among those measures, Greenpeace notes “the insulation of buildings, the replacement (not just the revision) of gas boilers for heat pumps and self-consumptionwith which all buildings could be self-sufficient in energy and meet the European mandate of being buildings with almost zero consumption, as well as encourage efficiency and the use of renewable energies in industry”. Greenpeace proposes to ban short flights. pixabay Confidence in that in the small print of the saving measures “the necessary facilities are duly reflected so that shared self-consumption can be distributed in a simple way among different users”. In addition to the announced measures, Greenpeace claims “key performances” to reduce the consumption of gas and oil in all sectors. Among them, “end all fossil fuel subsidies, increase the speed of implementation of renewable energies, regulate and promote energy communities, ban short flights with railway alternative and regulate Low Emission Zones (ZBE) in cities, with a reform of the labeling of vehicles based on their real emissions”. Regarding the temporary subsidy measures for public transport, Greenpeace comments that it is still necessary to invest to improve the quality and frequency of all public land transport“which is not resolved with a temporary gratuity,” he warns.