Teenager is killed after PM operation in Boca do Rio: ‘they prevented the mother from helping’ 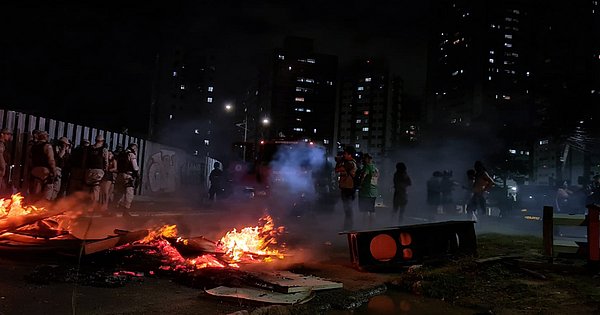 Relatives and neighbors of teenager Samuel Caio dos Santos de Oliveira, 15, staged a protest in the Stiep neighborhood on Thursday night (21), about two hours after he was killed in a police action that took place in the community of Baixa Fria, in Boca do Rio, where he used to live. Protesters complain that, in addition to the brutality in death, he was still prevented from being rescued by his mother. Samuel was 15 years old (Photo: Reproduction) According to a family member of the boy, he was on the street around 5 pm, when the Military Police arrived at the location. “He was at the door of the alley, like on any corner here, like the people are. There was an operation and the police arrived like this, shooting. They don’t care if he’s a mother of a family, a father of a family. Samuel was only 15 years old, he was a boy, innocent”, she said very moved. 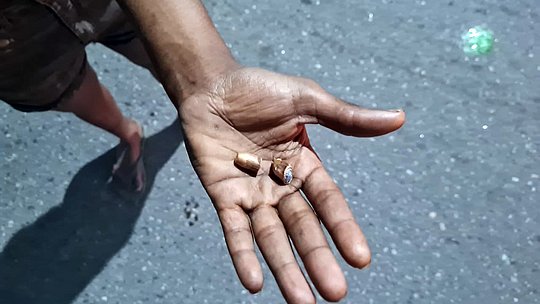 Family members show bullet remains that were left by the scene (Photo: Maysa Polcri/CORREIO) She added that the boy even called for his mother before he died, but was prevented from receiving help.

“He was on the floor calling his mother for the last time and no one let her approach, not even to say goodbye. The police prevented her from seeing her son, cursed, said he was going to slap him in the face. Then they threw him in the trunk of the car. , put a gun in his face and disappeared with him, we don’t even know where they took the body”, said a very shaken family member.

Another neighbor confirms the version and says he is shocked by what happened. “They’ve already arrived shooting. They don’t want to know if the person is a worker, nothing. Several vehicles arrived and, at the time, he was going up Morro do Borel and he got scared, then he ran. At that, the police arrived shooting. mother tried to get closer, to help, the police didn’t even let her pull over, they already took the body away and we don’t even know where they took it”, says a resident who, for security reasons, prefers to remain anonymous. Samuel, according to his neighbors and relatives, was a very popular boy in the neighborhood. “He was very dear to everyone. We are very sorry. Life cannot be taken that way, only God can take life. He is a human being who leaves. We are desperate with this situation, the police have to understand that they also have good people in the favela, people who need to be respected,” said a family member. All the residents interviewed by the report say that there was no exchange of fire and that Samuel was shot free of charge. Sought, the Military Police has not yet manifested. After despairing without knowing where the boy’s body was taken, family members received confirmation that he had been taken to Roberto Santos General Hospital. The boy’s mother and godfather went to the health unit and, there, confirmed that he was dead. “When I arrived at Roberto Santos, I wanted to know his situation, they were playing for each other. We went to the Civil Police room and, there, the social worker called a doctor, who said it was no longer with him. God I have a colleague there who helped me and the staff confirmed that he arrived dead. I managed to get in and recognized his body”, lamented the godfather.
denunciations
Residents took advantage of the demonstration to criticize the attitude of the Military Police, which, according to them, is always truculent. “I have lived here for 40 years and this is recurrent. They always come here like this, shooting, cursing the mother of the family, children, hitting people. people. They take the boys to the alley and kill them, the boy didn’t even have a gun, nothing”, said a housewife. Other neighbors of the boy also confirmed that the posture of the police in the locality is usually violent.
closed road
During the protest, which took place on Rua Professor Manoel Ribeiro, in Stiep, family members and neighbors set objects on the road on fire, causing traffic jams. Teams from the Military Police, the Fire Department and the Transalvador went to the scene to circumvent the situation. The road was reopened around 7:45 pm and traffic in the region is already flowing smoothly. * Supervised by sub-editor Fernanda Varela

See also  Find out what's coming to Netflix in February
Share
Facebook
Twitter
Pinterest
WhatsApp
Previous articleRosa Clará, on bridal fashion: "We are in figures well above 2019"
Next articleApple would be considering the use of 2 nanometer chips for its iPhone and iMac of 2025
suddz
Sudeshna is an engineering in making but has is keen towards writing blogs, news articles, product reviews and more. You would find her making use of the pen and paper in her free time.
RELATED ARTICLES
Entertainment