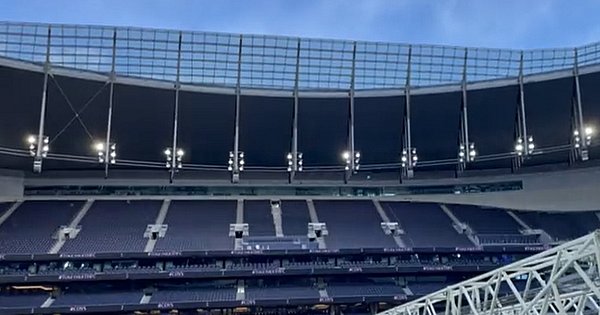 Storm Eunice has directly affected clubs in England. The roof of Tottenham Hotspur Stadium, located in north London, shook with strong gusts of 128 km/h on Friday (18). A video, which went viral on social media, showed what happened and scared the employees who worked at the place.

The roof of the @SpursOfficial football ground is currently pulsing up and down in the wind!(Turn your phone landscape and look at the suspended lighting rigs)#StormEunice pic.twitter.com/wzXTpzH4K3— Paul McNamara (@PGMcNamara) February 18, 2022

The fact, however, did not worry the engineers of Schlaich Bergermann Partner, the company responsible for the stadium project. They stated that the sway is normal and happens to compensate for strong movements in the structure. Tottenham were not only affected by the sway of their stadium roof. The club’s flight was cancelled, as was Burnley’s. Earlier, videos were released showing the difficulty of planes landing at London airport. Winds from Storm Eunice reached 195 km/h. With that, Tottenham had to change their schedule to Manchester, where they will face City this Saturday at 2:30 pm at the Etihad Stadim. Interestingly, the opponent has also recently suffered from the storms that have plagued England. The club’s plane took off and had to change course shortly after the clash against Sporting, for the European Champions League. In the Premier League table, Tottenham is in eighth place, with 36 points, against 63 of the current leader, Manchester City.

See also  Sex Education Season 3: Release Date, Teaser, and Cast
Share
Facebook
Twitter
Pinterest
WhatsApp
Previous articleWhat is paresthesia and when does it appear after the third covid vaccine?
Next articleCall of Duty Vanguard finally receives its competitive gaming beta
suddz
Sudeshna is an engineering in making but has is keen towards writing blogs, news articles, product reviews and more. You would find her making use of the pen and paper in her free time.
RELATED ARTICLES
Entertainment