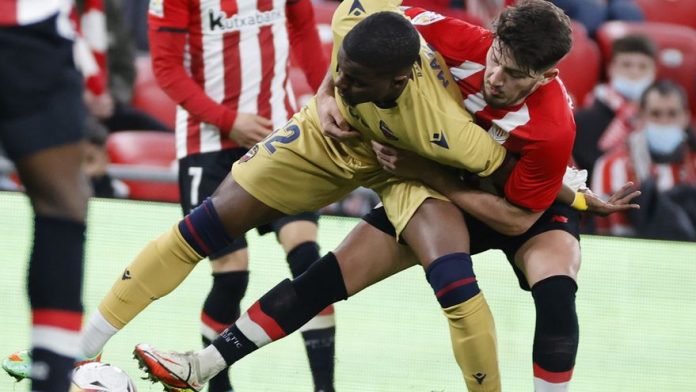 The high self-esteem with which Levante landed in the match against Athletic was knocked out with a blow of reality that translates into setbacks. All the steps that Alessio Lisci’s team took towards permanence were in vain after falling resoundingly in San Mamés (3-1). Despite the fact that he had a worthy first half, in the second he threw all the work he had done to the ground, and gave permission for the mistakes that weighed down the team on previous occasions to flourish again. He triggered the reaction and lost opportunity to get closer to salvation. A defeat that, after the famous seven points out of nine, returns pessimism to Orriols. To make matters worse, Morales was injured in his left knee and his availability, in the absence of a medical report, is unknown. Bad news for a team that is accumulated. However, the corner kicks in just one hundred and twenty seconds were the demonstration that the Granota team traveled to San Mamés with the indisputable intention of achieving a victory that would give them wings in their fight to achieve salvation, but Athletic, far from falling into defeatism after falling in the Cup semifinals, he pulled morale to corsete his rival. Not in vain, Cárdenas, enlarged the figure of him under sticks to hold his own against the siege to which he was subjected, in the first half hour of the match, Marcelino García Toral’s team. The footballer who ended up the most unhinged was Williams, since he was unable to beat the youth squad on the two occasions he had. First, in a one-on-one that he reduced the ’34’ and then in a shot at the near post without complications for the goalkeeper. Minutes later, Sancet, from the front and after getting rid of Róber Pier, executed a shot that, with a changed hand, diverted to a corner that, later, almost ended in a goal if it were not for Miramón, since, on the goal line , cleared a shot from Íñigo. However, Cárdenas’s best intervention served to rob Álex Berenguer of what would have been a real goal. After receiving a ball from Vencedor, the ‘7’ accommodated it and launched a poisoned shot that the goalkeeper deflected, with a gliding flight and with the tips of his fingers. Levante, however, slowed down their opponent’s revolutions, matching forces in midfield and looking for their sharpest men. In his attempts he found Morales, who a few minutes from the end of the first half, starred in a whiplash in the crescent of the area that ended up hitting the crossbar. Despite this, it was a flash that preceded the drama in which the Levanters plunged. The Comandante’s left knee injury was the prologue, when the first part of him went into his last tail, and he came off badly trying to snatch the ball from Vesga when his left right knee made a destabilizing gesture. An action that forced him to leave the field of play on a stretcher, with symptoms of pain and in tears. However, in the second half, Levante took a step back, gave way to Athletic and paid dearly for him. In a margin of fifteen minutes, those of Alessio Lisci returned to their most insufficient version. In fact, Álex Berenguer and Iñaki Williams removed the thorn they were dragging in the first half. The ‘7’, in the 63rd minute, put a cross to the penalty spot that finished off the back of the net, and a quarter of an hour later, he was the assistant for Williams, at third, to turn an action around Levante’s offensive with which Athletic drew up a timidly defended counterattack. Zárraga, in the nineties, put the finishing touch to the game with a 3-0 from the penalty spot that De Frutos made up at the end of the match, but without a positive effect for a Levante that punctures the reaction balloon.