Simone Biles is engaged to NFL player: ‘Everything I dreamed of’ 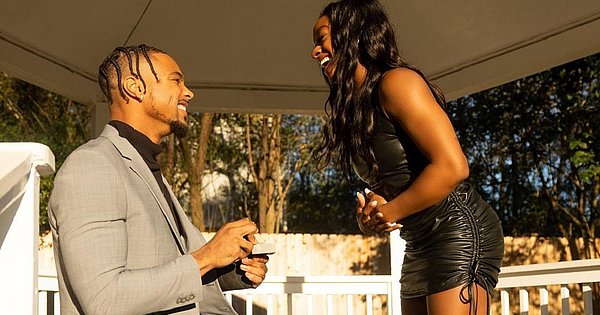 Love is in the air! Simone Biles, world artistic gymnastics star, has announced that she is engaged. The news was shared by the American on Tuesday (15), on social media. The Olympic champion said ‘yes’ to American football player Jonathan Owens. “Easiest yes ever! I can’t wait to spend forever and ever with you. You’re everything I dreamed of and more! Let’s get married, fiance,” wrote the athlete. The two have been together since mid-2020. Safety of the NFL’s Houston Texans, Owens also shared photos of the proposal, and stated that it was a surprise. “She had no idea what she was coming up with,” he wrote, thanking friends for their help. He also celebrated, “I’m ready for ‘forever’ with you.” The diamond ring was produced by Zo Frost&Co, an American jewelry company famous mainly among professional NFL and NBA players. Simone Biles won four gold medals and one bronze at the 2016 Olympic Games in Rio de Janeiro. In Tokyo-2020, the 24-year-old athlete decided not to compete in several events, choosing to preserve her mental health. Still, she won a silver, in the dispute for women’s teams, and a bronze, in the beam. The American was named Athlete of the Year 2021 by Time magazine. It was an acknowledgment of Simone’s courage in opening up a dialogue about her mental health and prioritizing her own well-being, even during the Tokyo Olympics. The gymnast was also the face of a movement against abuse in sport. The multi-champion brought together other athletes in a lawsuit against Larry Nasser, a former doctor for the US artistic gymnastics team, accused of physical, sexual and moral abuse. He was sued by over 250 women.

See also  Dr. Brain season 2, Here's how you should be watching it
Share
Facebook
Twitter
Pinterest
WhatsApp
Previous articleSpain, the country with the most remote desktop attacks in 2021
Next articleThe Cyberpunk 2077 team is looking at ways to improve performance on the Xbox Series S
suddz
Sudeshna is an engineering in making but has is keen towards writing blogs, news articles, product reviews and more. You would find her making use of the pen and paper in her free time.
RELATED ARTICLES
Entertainment