Ruben Burgos: "We have to persist to play more finals and win them" 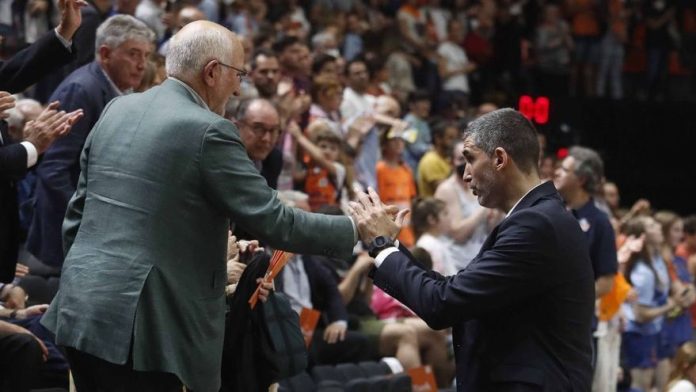 Despite the bad taste in the mouth of the defeat in the final against Perfumerías Avenida Salamanca, Rubén Burgos was convinced that this team will be able to play more finals and win them, especially for a project that continues to grow year after year. Of the game, however, he highlighted that “many small details have influenced, they have scored every important shot, that has given them confidence and although we were in a good rhythm of play, our accuracy was not being high, but the team was with the mentality to come back and we did it after the break, even with a small advantage.There are many details in the finals, game things and emotions, as well as small errors in free throws or some finishing, also by the coaching staff. The public has taken us on wings, to believe and grow. If it were for the merit of La Fonteta we would have won every year because it is the best fans there is. But Salamanca has been more successful, but has once again depended on Copper in many aspects, although we congratulate them because they are a deserved champion, they have always been required and we, to persist and try to play more finals to win the ones that are missing. The effort is made day by day and you have to persist”. Looking to the future, he added that “we can improve because we can, we have ambition, infrastructure, support. We have to improve. I have seen La Fonteta as the day of Yekaterinburg. It is the culmination of something and let’s see if we can play the next Euroleague. The worst moments have been the injuries of the players. We are touched by the defeat because our ambition is the maximum. We’ll rest and think about what we can do better.” Regarding the free throw failures that could have been decisive, he downplayed them. “They have also missed some free throws that could have opened up more space, but those details have undermined our moral. We train many things that have not all come out, but in decisive moments, emotions and fatigue also play“.

Regarding his situation at the club, Rubén Burgos stressed that “I am very proud to be part of this project and to be able to help along this path. From whatever position I am, I will be helping the club because I am very grateful.. I arrived as a child, I played, I was trained as a coach and I am proud to be at home and on my land. We are lucky enough to have a good budget thanks to our patron, but it encompasses many things, not only salaries, but all the L’Alqueria teams, travel, facilities, but everything is worth money and everything falls under the budget, the salaries of the players and coaches too, staff salaries are average, they are not top and each one earns what they deserve. It is a great club, with many medical and personnel services and everything is worth a lot of money.”

Of the emotion and tears of the captain, Anna Gómez, Burgos highlighted that “I have seen her emotional because she feels the team and the city, she is glue and hook in the team and in the locker room. We would not be here without the spectacular performance it has given. It is normal for her to feel it, she is Valencian and wears very engraved colors“.

Regarding the preparation of the squad for next season and whether or not the presence in the Euroleague conditions it (they have to play the preliminary phase), he limited himself to pointing out that “that question is more for Esteban Albert That for me. I do not know”.