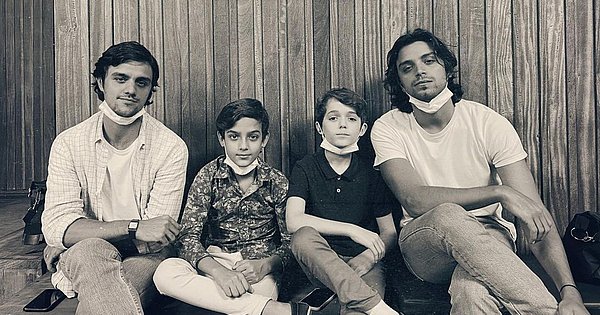 Rodrigo and his brother Felipe Simas are the protagonists of As Aventuras de José e Durval, produced by Globo Rodrigo Simas shared a photo of the preparation for the miniseries As Aventuras de José e Durval, about Chitãozinho and Xororó, alongside his brother, Felipe Simas , and child actors, Pedro Lucas and Pedro Lins, who play the country duo as children. The actor revealed that the image is from 2021: “This photo was on November 10, 2021? We were at the end of the preparation process. I had no idea how much we would still live.” Simas highlighted the honor of having played the sertanejos: “I think I can speak for the 4 of us. We had the honor and happiness of bringing José and Durval to life. A script based on the life and songs of Chitaozinho and Xororó. Rodrigo made a point of thanking the entire miniseries team:

“The four of us wouldn’t do ANYTHING if it weren’t for the unity and will of an entire F*DA team. Thank you, Hugo Prata, for your leadership and trust. I wanted to score everyone here but I won’t be able to.”

The filming of the TV Globo production ends tomorrow and the artist showed that he already misses him: “Tomorrow we end the filming cycle. I write this message with emotion overflowing, my heart racing with gratitude and longing for a project that we were very happy.” As Aventuras de José and Durval is produced by Globo, based on the history and career of the sertanejos, referring to the registered name of both.

See also  Red Notice: To Stream Or Not To Stream? Review
Share
Facebook
Twitter
Pinterest
WhatsApp
Previous article‘LEGO Star Wars: The Skywalker Saga’, experience the three ‘Star Wars’ trilogies… brick by brick
Next articleTwitter has modified a key way in which deleted tweets could be preserved
suddz
Sudeshna is an engineering in making but has is keen towards writing blogs, news articles, product reviews and more. You would find her making use of the pen and paper in her free time.
RELATED ARTICLES
Entertainment