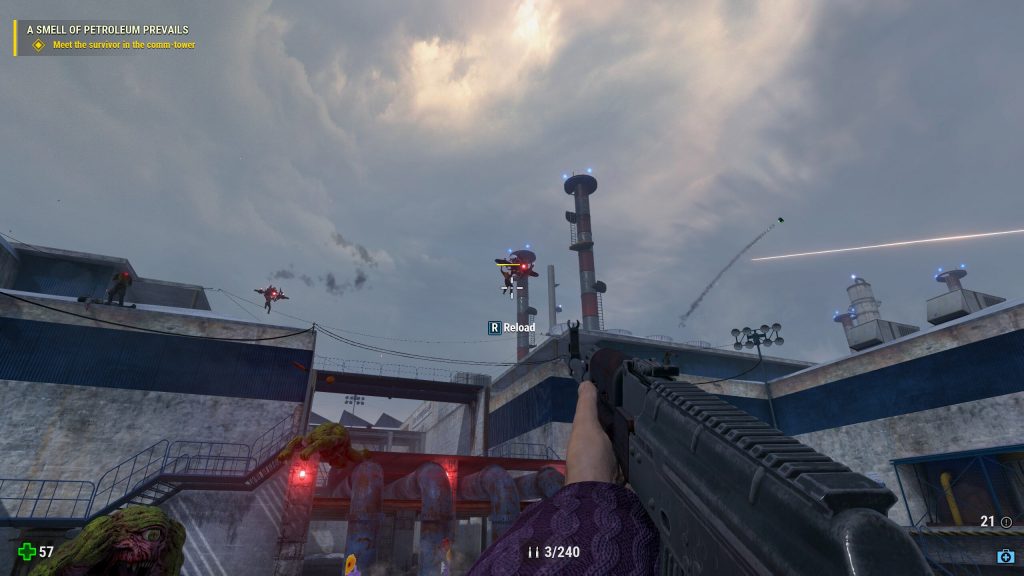 Over the years I've noticed that there are two communities whose fanaticism for a franchise goes beyond what I imagined. The first is the Heroes of Might & Magic 3 community, which has held tournaments for the RPG/strategy hybrid since 1995. The second is Serious Sam. The fact that the Siberian Mayhem (Steam/GOG) “standalone expansion” was made by Timelock Studio — made up of modders who have already created campaigns for and mods for Serious Sam 3 — is not surprising. What really impresses me is how they have such similar and at the same time so different views of Croteam.

I really like Serious Sam, so much so that Serious Sam 4 was one of my favorite games of 2020 even though it had its share of problems. Siberian Mayhem is like taking the fourth game, putting it in a mixer, removing the excess and leaving only the parts that matter to those who are already fans. In practice this means a shooter that doesn't hold your hand even in the first stage.

Where Serious Sam 4 took a long time to introduce characters, new types of mechanics and enemies — something necessary, since the franchise hasn't shown up since 2011 —, Siberian Mayhem already puts you in the middle of the action and sends the famous “oops, turns around to survive.” Not even five minutes into the game and I've already been introduced to a new type of monster that took me by surprise.

This is a foundation that Timelock Studio maintains throughout the five or so hours of Siberian Mayhem. A new enemy, a new weapon variant, something new around every corner. It might be a variant of a Serious Sam 4 enemy, but it will offer you a new kind of challenge, and that's a good thing. All this change is very good for the franchise.

After all, since Serious Sam 3, Croteam has focused on two types of areas: maps that alternate between labyrinths and small arenas, and gigantic maps that act as an arena. Anyone who has played Serious Sam First and Second Encounter knows very well that this is part of the franchise's DNA. At the same time, the amount of "huge arenas" with the new "legion" system – which increases the number of enemies on the screen – has not had its potential properly demonstrated in Serious Sam 4.

Ironically, the legion system takes a more prominent role in Siberian Mayhem as Timelock Studio opts to create more closed arenas. It's one of the expansion's riskier propositions; Serious Sam has a degree of "positioning", enemy prioritization and advanced techniques, but this tends to be reserved for mods. Battles against monsters take place in warehouses with platforms and jump pads; ammunition was counted on the finger and the desperation was real.

This trick up the sleeve from Timelock Studio makes most stages of Siberian Mayhem, even if set in Russia, much more visually interesting than Serious Sam 4's globetrotting. door by activating a generator (Sam comments, “Hey, there's not going to be an ambush,” which got me a good laugh). The team knew how to explore the maps and create very different situations both in terms of verticality and in knowing how to segment themes within the map itself. For me, a longtime Serious Sam fan, it's almost like revisiting the first maps from First and Second Encounter — which I set at sublime levels compared to the rest of the other games — under a new lens and with a different concept.

This proposal also extends, in parts, to the more “open” areas of Siberian Mayhem. Timelock Studio doesn't pass up the opportunity to include vehicles ranging from a snowmobile to a Mech armed with a chainsaw. Even in these areas Serious Sam 4's sense of "linearity" is traded for much more "freedom" to explore.

For example, the section where you control the Mech in Siberian Mayhem is less an attempt to create a goofy setpiece and more of Sam's destructive potential being unleashed to the sound of a quirky Tetris soundtrack.

Likewise, the “open world” sections in Siberian Mayhem denote the biggest differentiator between Croteam and Timelock Studio. In Serious Sam 4 the areas were almost like “means to an end”. Get on a bike and go to point A, then point B, and maybe do an optional objective. Timelock removes the excess of optional objectives in favor of secret areas and visual indicators that encourage you to veer off the beaten path and sometimes even run into a boss.

Perhaps this point is the one that best demonstrates Timelock Studio's “modder” roots. Anyone who plays Serious Sam knows that half the fun is finding all the secrets on the map, even if those are traps (I still don't accept that Croteam hid a missile launcher in the first map of Serious Sam 3 and I didn't find out until five years later !). Rather than feeling annoyed at having to take another vehicle, I was ecstatic about being able to explore more of Siberia and see what secrets I would find. I was very well rewarded with memorable situations, insane battles, a good dose of humor and some references to games like Metro: Exodus and inside jokes from the Russian community.

But as I said at the beginning of the text, Timelock and Croteam have the same and at the same time different visions for Serious Sam. At one point the two agree: the game has to end with a battle on a huge map against a horde of enemies. As “traditional” as it is — and Timelock even adds some “twists” like artillery and verticality — it's already getting a little worn out. Serious Sam 4's final battle was the lowest point in the game and the same was true for Siberian Mayhem. At least he picks up the pace at the last second with an excellent boss and an unexpected close.

I know, taking the “epic” battle out of a Serious Sam finale is like asking to take the double-barreled shotgun out of Doom 2. its roots instead of reinventing itself like Doom (2016) and Doom Eternal. I believe, however, that there are ways to make these final moments more interesting without losing their essence. Whether by using more structures to break the rhythm, static defenses, or even the presence of allied NPCs to give a little more emotion and humor.

That's a question that must be answered by Croteam herself in the upcoming Serious Sam, and one I'll hammer myself into until that happens. Siberian Mayhem is more Serious Sam for those who like the franchise, and a great example that mods can and should be taken seriously. For more companies that recognize community efforts.