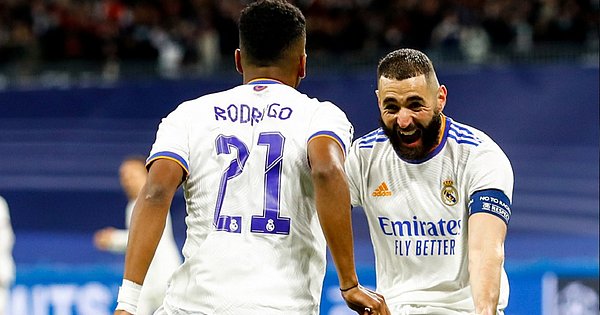 There was no lack of emotion to define the first semifinalists of the Champions League, this Tuesday (12). Defending champions Chelsea even managed an incredible comeback over an apathetic Real Madrid 3-1 in normal time, but saw Benzema score in extra time and ended up eliminated. Villarreal, on the other hand, pulled off a heroic 1-1 draw and overthrew the mighty Bayern, one of the favorites for the title. At the Santiago Bernabéu, Real almost tasted their own poison. The Merengues had secured a 3-1 victory in the first leg in England, and seemed to have progressed smoothly. But the biggest winner of the Champions League, owner of 13 cups, was surprised by Chelsea’s effectiveness. The first goal came in the 14th minute, with a firm shot by Mason Mount. At five minutes into the second half, the second came, with a header from Rüdiger in the left corner. From there, the game caught fire. Chelsea even scored with Marcos Alonso, at 16, but the bid was annulled by VAR. The third then reached 30, with a great goal from Timo Werner. But, after almost scoring the fourth, the Blues saw Modric make a beautiful throw for Rodrygo to take the decision to overtime. Right at the beginning of the extra stage, Vini Jr took off and got up in the measure for Benzema to head in, at 5 minutes. Chelsea were forced to attack and had good chances with Havertz and Jorginho, but elimination was decreed. In the semi, Real will pick up the winner of Atletico Madrid and Manchester City, who will face each other this Wednesday (13), in Spain. The English won the first duel by 1×0. Bayern, after losing 1-0 away, needed the win to stay alive in the competition. And, as expected, he entered the field dominating Villarreal. At six minutes into the second half, the Bavarians managed to open the scoring, when Lewandowski, the current best player in the world, received it at the edge of the area, turned and finished in the corner. Meanwhile, the Yellow Submarine was trying to defend itself, minimizing spaces and trying to leave at speed. In the end, at 43 of the second half, the strategy worked. In a fulminating counterattack, Moreno was launched and crossed for Chukwueze to leave everything equal and guarantee the Spanish spot. Champions of the Europa League last season, Villarreal are back in the Champions League semi-final after 16 years. The team now awaits the winner of the return game between Liverpool and Benfica, this Wednesday (13), in England. On the first leg, the Reds beat the Portuguese by 3×1.

See also  The World's Finest Assassin Gets Reincarnated in Another World as an Aristocrat Episode 7: When & What to expect on screen?
Share
Facebook
Twitter
Pinterest
WhatsApp
Previous articleThe elegant wardrobe that you can find at a reduced price in Leroy Merlin
Next articleIntel Arc A350Ms lose huge amounts of performance with Dynamic Tuning enabled
suddz
Sudeshna is an engineering in making but has is keen towards writing blogs, news articles, product reviews and more. You would find her making use of the pen and paper in her free time.
RELATED ARTICLES
Entertainment