Publicist reports that she was attacked in Vitória’s game: ‘I was slapped in the face’ 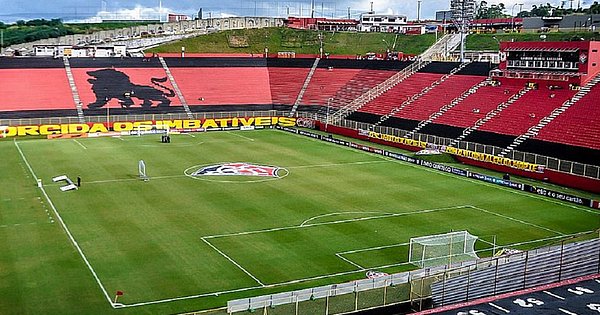 What was supposed to be a fun experience among friends became a night of terror for publicist Mariana Cardoso during the match between Vitória and Floresta, Saturday (16), in Barradão, for the Brazilian Championship Series C. On social media, Mariana reported that she went to the game with friends and, after the match – which ended 1-0 for Floresta -, she was attacked by some Vitória fans. The publicist says that, as she does not support any football team nor was she born in Bahia, she went to the stadium with a black shirt, but ended up being mistaken as a supporter of rival Bahia. She claims that the aggressors are part of the Os Inbatíveis fans. “Yesterday, April 16, 2022, I, a woman, was brutally assaulted, humiliated and cornered by 5 UNIFORMED MEN FROM THE UNBEATABLE FANS. It all started when I was invited by friends to go see Vitória’s game at Barradão stadium. Because I’m not a fan, much less born in Bahia, I went with a non-team shirt (all black!)”, she began.

Yesterday, April 16, 2022, I, a woman, was brutally assaulted, humiliated and cornered by 5 UNIFORMED MEN FROM THE UNBEATABLE FANS @osimbativeis. It all started when I was invited by friends to watch the Vitória @ECVitoria game at the Barradão stadium. Me for— Mariana Cardoso ???? (@mari_cardoso19) April 17, 2022

“I got there and respected all the fans! I sat at the top of the stadium and stayed with my friends watching the game. crowd. At that moment I was laughing with friends at a message we had received! Okay, that was my mistake, laughing with my friends”. “When I least expected it, 5 men cornered me and started asking me a lot of questions, they started to DEDUCT that because I was laughing I was a Bahia fan, at that moment they pushed me away from my friends and started the offenses and aggression. They put their finger in my face and slapped me in the face”, he continues. Also according to Mariana, after managing to get rid of the aggressors, she went to a Military Police team that was at the stadium, but did not receive support. Only after meeting a female police officer and explaining the situation, she was taken to the police base in Barradão. Even so, the attacks continued. “At that moment I found a female PM in the middle and I grabbed her and said: ‘Help me, they’re going to beat me up’. Yes, I had been threatened by my aggressors that the moment I left the stadium I was going to be beaten. She saw my despair and hugged me and took me to the police base. I left the stands booed and humiliated, as if I were an animal, a criminal. Meanwhile my attackers were looking at me and laughing. I asked the police to go after me them and NOTHING WAS DONE!”, says Mariana in the report. The publicist also claims that the delegate on duty at the stadium did not register a case against the aggressors. “But there [base da polícia] I had one more disappointment. The delegates laughed at me and told me to go home because I had more important things to do. Now I ask myself, isn’t an ASSAULTED WOMAN important? Well, I had to go home escorted by MY FRIENDS, because the police didn’t even do that! Now I ask myself, what is my mistake? Have fun? Laugh with my friends? Not being fanatical about a team?”, he asks. In contact with the CORREIO, the Military Police reported that, after the game, a woman sought out police officers from the Specialized Event Policing Battalion (BEPE) and reported having been verbally assaulted in the stands. Also according to the PM, the victim did not know who the perpetrators were. The note also says that police officers accompanied the woman to the exit of the stadium and guided her to file a report at the police station. The Civil Police did not respond to the questions of the report until the moment of publication of this article. Once this happens, the positioning of the corporation will be included. Vitória informed, through the press office, that it was not aware of the case.

See also  Netflix Lupin Season 3: Release Date, Cast and Plot
Share
Facebook
Twitter
Pinterest
WhatsApp
Previous articleNetflix introduces ‘Play Something’ button for the undecided
Next articleWindows 10 21H2 is now available to all users
suddz
Sudeshna is an engineering in making but has is keen towards writing blogs, news articles, product reviews and more. You would find her making use of the pen and paper in her free time.
RELATED ARTICLES
Entertainment