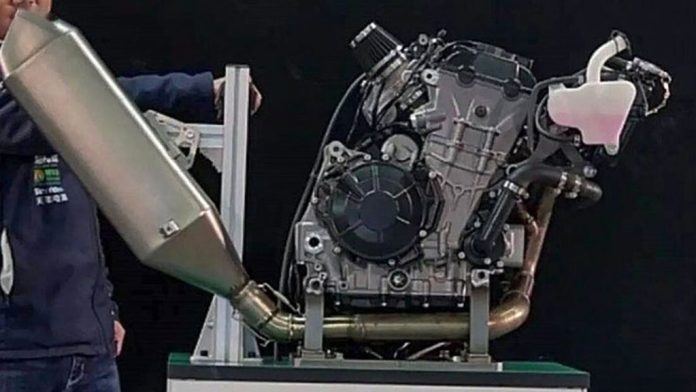 The Colove 800X Super Adventure is a new adventure bike, powered by a parallel twin-cylinder engine that strongly resembles that of the KTM LC8. According to information from the foreign press, it goes into production in 2022.

The motorcycle is produced in China, and this new model will have different versions, being a mixed one for dirt and asphalt, and another one with an absolute vocation for the off-road. Certainly, it can become a competitor in the market, not only of the KTM 890 Adventure but of the Yamaha Ténéré 700 itself .

Until now, the Colove models reached a maximum of 500 cm³, being powered by two-cylinder engines, which seen up close closely resembled the Honda CB500 engine.

However, we remind you that as a partner of KTM in China, CFMoto also has an engine for its Enduro 800 MT that is very similar to the Austrian LC8 set. And everything points to that same two-cylinder 800 engine providing the necessary impetus for Colove to make the leap to larger displacements.

As mentioned above, its two-cylinder engine resembles KTM's LC8, and only the design of the cylinder caps and cylinder heads differs from the Austrian model. With a diameter of 88 mm and a stroke of 65.7 mm, which exactly corresponds to the measurements of the KTM engine and, with the same displacement in the range of 800 cm³, the manufacturer specifies for the 800 X a power of 105 hp and 8.7 kgf.m.

One of the versions of the new Colove 800X Super Adventure has a 21-inch front wheel and an 18-inch rear wheel. This option has a fuel tank with a capacity of 22 liters and a weight of 160 kg. The seat height is 875 mm.

The second model is primarily designed for road use. Ground clearance and seat height decrease compared to its sibling, with a set of 19-inch and 17-inch wheels.

Both have inverted forks, spoke wheels, dual disc locks at the front, center suspension at the rear, LCD instrumentation with integrated navigation and a tubular steel frame. The new Colove 800 X Super Adventure will go into production later this year. Although it is not known whether it will make it to Europe, given its cylinder capacity there are many possibilities that the bike will also land in other markets.

Share
Facebook
Twitter
Pinterest
WhatsApp
Previous articleAnalysis – Expeditions: Rome
Next articlePS5 / Xbox Series S and X version of Chernobylite comes out in April
Admin
Hi, I am Seo expert, an MCU geek, a Star Wars fan, With more than 5 years of experience in the field of entertainment journalism and 28 years of experience in being a movie and TV show geek, I contribute to cuopm.com as its Cheif-Editor. My work here is to provide you with the craftily selected pieces of news from the Entertainment industry so that Pamdemocrat can be your ideal spot for all the latest Hollywood buzz and gossips. Ping me on my email ID below and let's discuss the latest theories and your favorite moments from my favorite TV shows and movies.
RELATED ARTICLES
Sports