PM says he found gun and drugs with dead teenager in Boca do Rio, and family denies 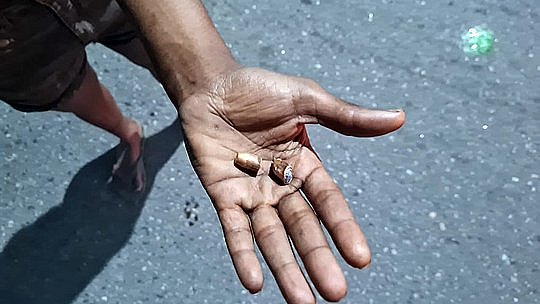 The Military Police claimed to have found with Samuel Caio dos Santos de Oliveira, 15 years old, dead in the Baixa Fria community, in Boca do Rio, on Thursday (21), a 38-caliber revolver, with four spent ammunition and one intact, 84 rocks of crack, 20 portions of marijuana and 29 of cocaine packaged for sale. The family denies this version. According to the corporation, military police officers from the 39th CIPM (Boca do Rio/Imbuí) were called by a popular person, who reported having been threatened by armed criminals who trafficked drugs on Rua João Nunes da Mata, in Boca do Rio. The PM stated that the garrison found a group of armed men at the scene and that they fired shots at the military. There was retaliation, and the suspects fled, but, as the search continued, the police found Samuel’s body, who, according to them, was immediately taken to the Roberto Santos General Hospital (HGRS). With him, the police said they found the illicit material, but Samuel’s mother, Cintia Oliveira, denied the PM’s version. She stated that there was no exchange of fire, that her son was alone at the scene, leaving the house. “He [o policial] killed him and still said ‘speak, speak, speak’, the boy had nothing to say and he shot the rest of the way in the face. It’s all a lie, my son didn’t have drugs, he didn’t have anything”, claimed the mother. The seized material was sent to the PM’s Internal Affairs Department, where the fact was registered. “I only have one thing to say to them: God’s justice is delayed, but it does not fail. And that they need to find another justification for these cases, because this confrontation thing is already well known, it’s already ugly”, said Samuel’s mother. Cintia further reported that the police shot Samuel after he shouted for her. “He shouted ‘Mainha’ and I only heard the shots”. Still according to her, the teenager was a user of marijuana, but he did not sell it. “They [a PM] they will always tell this story, they will take a child away from a mother and they will always justify saying that it was a confrontation and that he had drugs, but God’s justice will be done”, he concluded. On Friday, family and friends staged a new protest in the Baixa Fria community, in Boca do Rio, after the teenager’s death.

See also  Is 'True Detective Season 4' Going to Delay More?
Share
Facebook
Twitter
Pinterest
WhatsApp
Previous articleUrban artist Rochy RD arrested for allegedly sexually abusing a minor
Next article7-Zip vulnerability is disputed as being unreproducible
suddz
Sudeshna is an engineering in making but has is keen towards writing blogs, news articles, product reviews and more. You would find her making use of the pen and paper in her free time.
RELATED ARTICLES
Entertainment