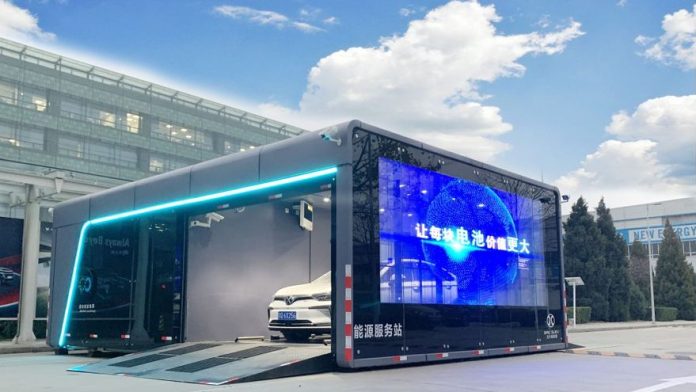 battery exchange It is one of those ideas that the automobile industry has worked on as a method to counteract the excessive time it takes to charge one or the lack of charging infrastructure. At the motorcycle level, companies such as silence or Gogoro have shown that battery swapping has great potential. In the automotive industry, however, few manufacturers are interested in this possibility beyond Nio and his Power SwapsCATL or, as recently announced, Mitsubishi. The signature of the three diamonds has confirmed that it will collaborate with Bosch and the Chinese company Blue Park Smart Energy to develop a battery exchange service for vehicle fleets, shifting the focus from the battery from a vehicle component to a service –Battery as a Service (BaaS)– which can be contracted as a subscription or pay per use. The idea of ​​the Japanese company is to facilitate the work of professionals by offering a battery change that lasts just a few minutes, thus avoiding stoppages to recharge or the need to install large charging infrastructures in the companies’ plants. According to Bosch, this solution would reduce the companies’ initial investment, as well as operating costs. The ultimate goal is reduce total cost of a fleet of electric commercial vehicles.

Using cloud technology, based on the system cloud from Boschthis new service, called Battery in the Cloud, you will be able to continuously analyze the state of each battery, being able to anticipate a drop in performance, and take the pertinent measures to delay it as much as possible, and predict its useful life. Once the maximum performance of the batteries has been lost, the intention is to use them for energy storage and then, as the last stage of their useful life, for recycling. In a joint statement, Mitsubishi states that the project will be based on creating a new business model based on the system Battery in the Cloudwhich will be integrated into the battery exchange stations developed by Blue Park Smart Energy. Soon a financial partner will be sought to develop the economic section of the project. The service is currently in the testing phase in Chinathe main global market for electric cars, but the ambition of the three parties is to create an entire ecosystem for exchanging batteries that can be exported to all markets in the world.