Mestalla presses for the future of Bryan Gil and Hugo Duro 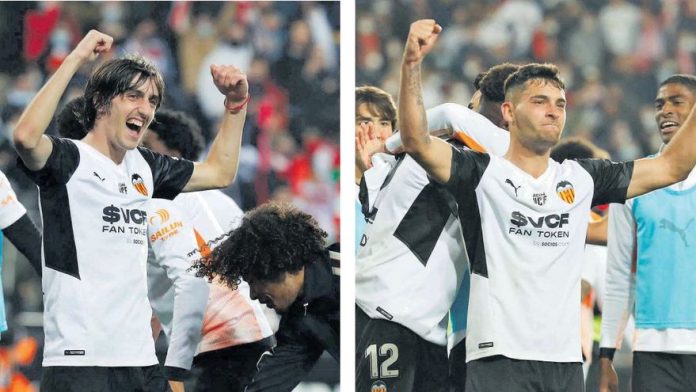 Mestalla requested the continuity of Bryan Gil and Hugo Duro shouting «Bryan, stay! and “Hugo, stay!” The two young Valencia footballers, on loan from Tottenham and Getafe respectively, have been at Valencia for a very short time (Bryan just a month) but Both have penetrated the heart of Valencianism due to their commitment, cheekiness, charisma and the positive energy they give off. They perform sportingly, form a group in the locker room and transmit to people on and off the field.

The fans have been excited about them and want them by their side. And the longer the better. This was demonstrated by Mestalla on Wednesday’s magical night. First on the lawn and then on the balcony of the Swedish Avenue. You have to go back to the celebrations of the Centenary Cup to find the last time that Valencianism claimed the continuity of a player. «Rodrigo, stay! Bryan and Hugo generate the same.

The one from Barbate lived an unforgettable night in Mestalla. From beginning to end. “If they tell me, I don’t believe it!” he said. He is not without reason. He has gone from being defenestrated at Tottenham to being the focus of attention and affection from the people at Valencia. He feels important in the team and valued by the club and the city. And also, loved by the locker room. Few players have integrated as quickly as Bryan because of his connection with captains José Luis Gayà and Carlos Soler. The left winger was amazed at what he experienced on Wednesday.

In his words, he had never experienced such a welcome. “I have never seen it in my life,” she admitted. One of the great moments of the night came when he was substituted. Bryan came out of the sideline of the center stand and circled half a furlong to get to the bench. During that journey, Mestalla stood up to applaud him and to dedicate to him for the first time the “Bryan, stay!”. A song that was later repeated in the celebrations. The player’s response was to follow the chants with jumps. The footballer and his family (they were all at Mestalla) are very grateful for Valencia’s welcome to the player and, whatever his future, they know that the Mestalla entity already has a place in his heart forever. Bryan assumes that he is owned by Tottenham and that his continuity is a club thing. Valencia will try a second loan until 2023. The problem is that it is not easy because the English have the last word and because, if they do not continue in London, Valencia is not financially able to compete with other European teams. For now, Valencia has managed to seduce Bryan with prominence and a lot of affection. AND that is not little.

The same thing happens to Hugo, although his contractual situation is very different. Valencia has already decided to exercise the purchase option of 4 million euros before May (deadline agreed with Getafe). Both the club and the player take their signing as property for granted. Hugo has connected with Mestalla from the first day as it seemed predestined with that “He played at Hugo Duro!” that on Wednesday it sounded loud again in the stadium (there was even a banner) first in the mouth of the fans and then in that of Gabriel Paulista with the microphone in hand. The man from Madrid was one of the great protagonists of the celebration.

He enjoyed like few others from the Mestalla balcony and, in the middle of the party, Valencianism reminded him that his future passes through Valencia for the next few years: «Hugo, stay! Hugh, stay!” The club, the team and the fans feel him as one of their own

Share
Facebook
Twitter
Pinterest
WhatsApp
Previous articleAgreement with the Fund: several early morning zooms and hot translations against the clock
Next article‘WWE 2K22’: Everything you need to know before the opening of the wrestling show
mohit
I’m mohit, I am a professional blogger, Digital Marketer, and Certified Google Partner. I write about Business ,Tech News,Travel, Food Recipe, YouTube Trending Video and Health And Fitness here on cuopm
RELATED ARTICLES
Sports