Marc Márquez: "I don’t trust a single bit of Ducati" 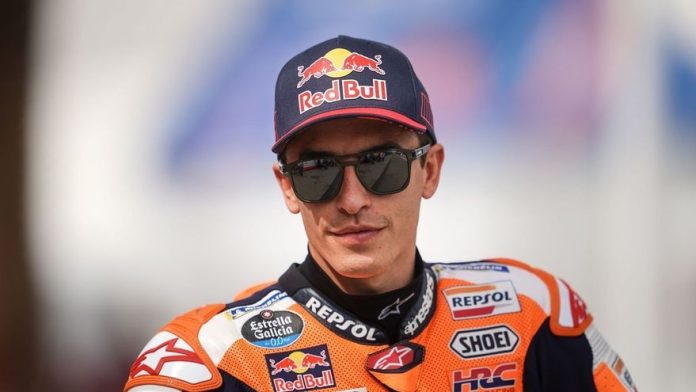 The Spanish Marc Marquez (Repsol Honda RC 213V)who finished second on the first day of practice for the MotoGP Qatar Grand Prix at Losail, was very happy to have been able to ride without any pain. “I have ridden without pain, it is a good sign, because I already came here very optimistic, because I felt good at home and I have ridden without pain”, highlighted Marc Márquez, and added: “Honestly I have driven well, normal, and I have done the maximum with what he had and with what he could”. “Now the unknown is what will happen during the other days, which is normally where I suffered the most last year, but today I rode better than all of last year in terms of sensations and it’s true that last year I won races, obviously, but now here the question is to know ‘if I’m fine, why not win on Sunday’, because Sunday will be another track, but at the level of my sensations I am improving and this makes me happy since I feel that I am going up”, insisted the Repsol Honda rider.

“Last year it was constant pain and with infiltrations, anti-inflammatories, but today I just rode and I didn’t notice any pain, which is the most important thing“Marc Marquez recalled. “I have a slight discomfort when I finish, but you are used to it since all the riders have some discomfort at the end, you move a lot and everyone has bumps or some discomfort in a finger, a shoulder or a foot, but the pain is something else point, it’s the point where the force drops and for the moment today there have only been minor annoyances that don’t prevent me from riding well”, he explained about his physical condition.

“I don’t trust a single bit of Ducati”

Of his rivals, Marc Márquez commented: “Perhaps the Suzuki looks like it is going well, but last year the Suzuki was here well with Rins and Mir, they had good races and at top speed they are going fast and this in winter was not appreciated as much, but here and now it is You are seeing that yes, although it is true that both Suzuki and Yamaha have always gone very fast here since the in-line engine for ‘x’ reasons has very strong points and in this circuit they exploit it well, but we will see in the race”.

8 MotoGP debuts the stadium for the 2022 Qatar World Cup MotoGP.com “Of course today both Rins and Mir are here to do first and second and then Quartararo. These three riders are the strongest,” said the Repsol Honda rider. “From Ducati, I’ll say it on Sunday, I don’t trust a hair“, he added. “The track will improve and now we are only on Friday and from a Friday to a Sunday, in all the boxes, it has been seen that the tortilla can be completely turned around. I wish today was Sunday, but it’s not, so we’re going to keep calm and work”, he stressed. As for his driving, he pointed out:”I am still adapting the riding style to the bike, I think it has been seen even on television that now it is a much finer and more polished style, because I still do not have the confidence, especially with the front end to, in quotes, squeeze it and get the most out of it, but when I try it, it’s not that I go faster, but rather that I try and go slower, and that’s where I’m trying to change that strong point I had of entering to the curve, sacrifice that point and win it in another”.

Rins heads the domain of the “Spanish Armada”, with Mir third

Alex Rins (Suzuki GSX RR) topped the dominance of the “Spanish Army” of MotoGP by being fastest on the first day of free practice at the Qatar Grand Prix, with four Spaniards in the top positions, including Mallorcan Joan Mir, third.

Álex Rins, the fastest on the first day of the new course in MotoGP EFE

Rins showed that the evolution of the new Suzuki is a reality and in a very fast circuit, in which the Ducati had always stood out, ended up becoming the protagonist of the day, ahead of a Marc Márquez (Repsol Honda RC 213 V) who also made it very clear that the new Honda works, and very well.

Joan Mir, the 2020 world champion, placed the other Suzuki GSX RR in third position, barely 147 thousandths of a second behind his teammate and 73 thousandths ahead of the first Ducati of the day, Jorge Martín’s Desmosedici GP22. The second MotoGP free practice session had to serve to confirm the sensations and everything seen during the first round, in which He highlighted the performance of the Repsol Honda and in general of all the Hondas, classified among the first nine positions, as well as that of the Suzuki, who took the lead with Alex Rins and Joan Mir, or the Aprilias of Aleix Espargaró and Maverick Viñales.

Share
Facebook
Twitter
Pinterest
WhatsApp
Previous articleWhat weight do the retirement regimes have that the Government says it will target
Next articleMolnupiravir, the first pill against Covid
mohit
I’m mohit, I am a professional blogger, Digital Marketer, and Certified Google Partner. I write about Business ,Tech News,Travel, Food Recipe, YouTube Trending Video and Health And Fitness here on cuopm
RELATED ARTICLES
Sports