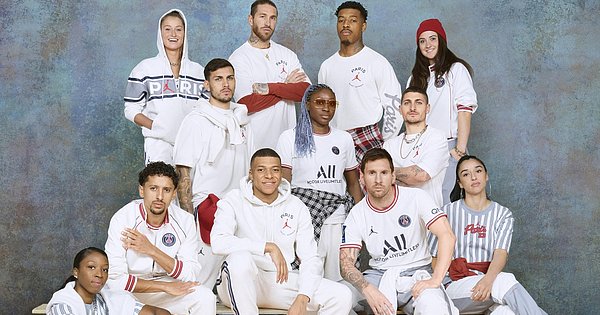 Paris Saint-Germain launched, this month, the fourth kit for the 2021/22 season. But a curious detail, which went unnoticed initially, is intrigued by Lionel Messi fans. The Argentine star’s boot ‘disappeared’ from all the official photos of the collection. Messi’s boots were hidden in PSG photos
(Photo: PSG/Disclosure) The explanation, however, is simple. Since 2018, the French club has partnered with the Michael Jordan brand, which is linked to Nike. And while the American sports company is PSG’s sports equipment supplier, Messi has been Adidas’ poster boy since 2006. So, to avoid a sponsorship conflict, the club put up a sign covering the boots of the Argentine star, who is sitting in the first row in the photos. In addition to him, 12 other PSG players, out of the team’s 31 athletes, wear Adidas boots, according to the newspaper Le Parisien. Mbappé is one of 15 who wear the Nike equipment. The Frenchman, by the way, appears next to Messi in the photos of the fourth uniform, but, as there is no conflict of interest, he does not have his feet hidden. Two others use Puma boots and one from Mizuno. The new PSG kit will be used by the men’s and women’s teams during the second half of the current season. The jersey has red stripes and blue details, and is inspired by the legendary Chicago Bulls uniforms, where Jordan made NBA history.

????⚽????Check out our new fourth #PSGxJordan jersey for the 21/22 season! ????⬜
The entire collection combines the club’s identity with the iconic codes of basketball and street culture. ❤️???????? https://t.co/4sotLFStbz pic.twitter.com/nuIMX1xyfQ— Paris Saint-Germain (@PSGbrasil) February 10, 2022

See also  SPOILER ALERT! The All Round Wife Episode 21
Share
Facebook
Twitter
Pinterest
WhatsApp
Previous articleCarlos Sobera: “Since I have dedicated myself to production, I try to have a commitment to theater and Hispanic dramaturgy”
Next articlePools that knew how to integrate with nature
suddz
Sudeshna is an engineering in making but has is keen towards writing blogs, news articles, product reviews and more. You would find her making use of the pen and paper in her free time.
RELATED ARTICLES
Entertainment