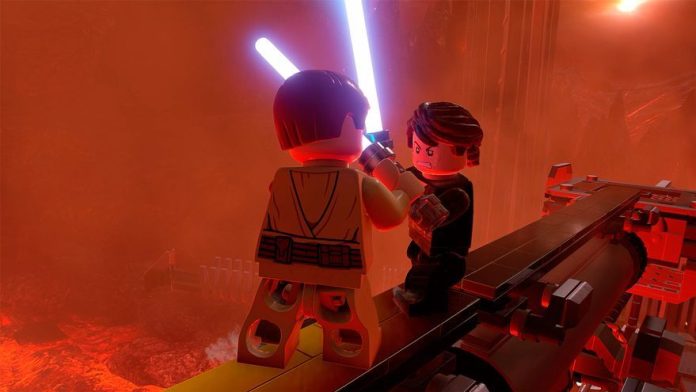 Skywalker. Few surnames sound as vibrant and exciting as this one. The sky walker. A complete declaration of intent for a legacy that brings together the three ‘Star Wars’ trilogies, an absolute reference in film culture since the 1980s and which, after the purchase of Disney, continues to this day in the form of a re-canonized universe. The heritage of the Skywalkers is introduced, once again, in the world of video games, but this time he does it, and in an absolutely brilliant way, using the bricks of Lego to build science fiction with which young people -and not so young- have grown up. Traveller’s Tales, in charge of the episodic productions of Lego Star Wars, are once again in charge of a project that collects the three complete trilogiesbut not in the form of a remake, but by reconstructing each and every one of the emblematic landscapes and stories collected in the films, transferring them to a new graphics engine, with deep new gameplay mechanics and, with so much content, that even the most faithful are going to have a hard time completing it one hundred percent. Ready to witness a journey that covers the main milestones of the franchise? Assemble your bricks and make them fit well, because the journey we are heading to is exciting and fun in equal parts.

Bricks! Give me more bricks!

As usual with LEGO iterations in the world of video games, the company focuses development in the form of Danish bricks. Everything is built with the iconic pieces, and this gives the adventure a fresh and friendly air. Those of you who have enjoyed the trilogies in past generationss you will find the playable bases quickly.

And is that ‘Star Wars: The Skywalker Saga’ introduces us to all nine films in the series from start to finish. From the beginnings of a very young Anakin Skywalker on his home planet, through the rebel resistance with Luke and Leia in ‘A New Hope’ until reaching the ‘Rise of Skywalker’ in the ninth episode. Each and every one of the emblematic scenes of the work are playable and enjoyable through the characteristic characters of the Danish. As soon as we start we will have, yes, the first episodes of each trilogy unlocked, having to overcome them to access their corresponding continuations. In this sense, there is content, situations and game mechanics to bore you. Although it is true, the work remains as a cooperative third-person adventure where the combats, jumps and puzzles are the protagonists, the studio has not wanted to emphasize the formula to avoid déjà vu: thus, each mechanic has been rebuilt in greater depth. We have coverage for firefights, flight sections through the universe orbiting a target planet, laser sword duels, secondary missions, skill trees for the -countless- available characters, and a long etcetera that, how could it be otherwise, can be enjoyed in cooperative format.

See also  Avengers 5: What Will Be The Next Lineup Of Superheroes?

‘Star Wars: The Skywalker Saga’ is the most ambitious video game in the series to date, and this leads to a series of methodological changes that make the title appear more serious and profound without losing its charismatic personality. For examplethe camera is more adapted to adventure gamess, allowing for more precise encounters with enemies both in combat and at long range; The confrontations against the mythical final bosses also have their granite of spectacularity, having to dodge, use force and attend moments in which to press a certain button to execute the corresponding cinematic.

These changes also go deeper into the class system that each character has.. Indeed: being Luke Skywalker is not the same as controlling Han Solo, and the abilities of the Jedi are far from what the dark side offers. For this reason, the developer has chosen separate each class and give it a specific skill tree (in addition to a general one) to increase its characteristics. Thus, the Jedi will be able to move objects with the force; engineers create specific objects and droids, among other things, translate unknown languages ​​and sabotage enemy technology, among others. The best of all is that the video game allows, at all times, to enjoy the adventure with a partner, which means more than 30 hours of fun if we want to relive the history of Star Wars -in cooperative we will advance faster-. The hours of play are multiplied by two if we want to get hold of the more than 1,000 collectible bricks scattered throughout the galaxy at war.

At the audiovisual level is where we find a greater qualitative leap. ‘Star Wars: The Skywalker Saga’ is Lego’s best-looking installment. The change in the graphics engine has allowed us to find ourselves before a video game that, although it looks like a toy, it alters the photorealism with the bricks in a brilliant way. In fact, there are moments in which the work directly seems like one of the films, to immediately show some parody capable of drawing us a smile. In this way, music plays a fundamental role and boasts all the licensed compositions of the series, placed at strategic points with the aim of making our hair stand on end as it happened in the cinema. The voices, in Spanish, have a good quality, but best of all, and this is something that we have loved, is that the work can replace the voices with the emblematic murmurs that have accompanied the Lego video game series, which accentuates the sympathy and fun of the scenes.

Little or nothing should be added to the lead. TT Games has reconfigured a franchise in style thanks to a video game full of content, news and profound improvements that make us see ‘LEGO Star Wars: The Skywalker Saga’ as the best title of the series so far. The artistic direction, the increase in graphic quality, the enormous content and the novelties it presents, invite us to stay for a long time touring this galaxy far, far away while we crack a smile.

Share
Facebook
Twitter
Pinterest
WhatsApp
Previous articleValencia BC-Ratiopharm
Next articleRodrigo Simas shows behind the scenes of a series about Chitãozinho and Xororó
sonu
sonu is a content writer who had worked on various niches. And served many clients. He is a management student also interested in research and marketing. His hobby is writing, reading and sketching. He is also a good orator.
RELATED ARTICLES
Lifestyle