He settled in the US 30 years ago and started a business “Made in Argentina”: “They love him” 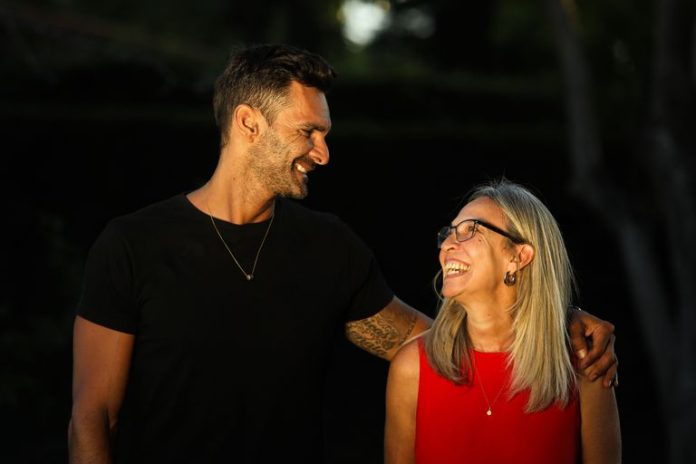 "Until I see almost everyone around town with mates in hand, I'm not going to stop," Silvia Sánchez proposed one day as a challenge in Batavia, a city she arrived at thirty years ago from her beloved Gonnet in Argentina. , and that it is a green paradise, distant about 45 kilometers from the mighty Chicago in the United States. And he ended up succeeding.

“It was a surprise the acceptance it had. Those who visit us to taste what we do always ask us how we got from so far to here”, says Silvia, and the query that people ask her has an answer.

“I got married and after ten days I went to the United States because my husband, Gustavo Cancelo, is a scientist, he worked at the Conicet -National Council for Scientific and Technical Research-, he had to travel for work and I accompanied him. That was the first time, then there was a second, we already had a daughter there, time passed. The truth is that we never said we were staying here to live forever, but it happened”, he recounts now visiting from the house of his nephew in Gonnet, the renowned dentist Lucas García Sánchez , who apart from his professional activity also contributes ideas for this project international culinary with Creole roots.

“I grew up here in this city in the same house with my grandmother, my mother and her, my aunt, until she went to live there. We have an excellent and particular relationship, we are a small family, we love each other and we help each other a lot. I try to contribute new objectives from here, such as bringing new native products from Argentina that the people there love ”, Lucas details.

Silvia tells what it was like to leave thirty years ago and establish a new life there: “At first we took it as something temporary, we were young with my husband and we never talked about it being definitive, that's why I tell you that I had a lot of fun, it was all an adventure . Gonnet to Chicago nonstop. Our first daughter was born there and the second in Argentina, but on the next trip we made to Batavia things began to happen so that time would pass and we would be left almost unaware. I think that not thinking or analyzing too much was positive for us to enjoy what was happening to us and that's how we developed in lands so far from our own”.

While her husband worked as a scientist, Silvia continued developing her profession as a teacher: “I always was and I started working there with the intention of learning different things to later apply them here in Argentina in the schools where I worked. First as a Spanish teacher, after Kindergarten, I progressed, my daughters at school were generating bonds and thus they established themselves and grew. Time passed and with Juliana, one of my daughters -the other is called Martina-, we dreamed of this undertaking. She studied a Bachelor of Arts, then did a master's degree in business, she worked for a company until a couple of years ago and I worked for a school until I retired and we launched a new adventure with our Argentine food house that we call ' Bocaditos' because we think of a word that is easy to pronounce and translate (web page: www.bocaditos.cafe – Instagram: bocaditoscafe_ba). It's been four years since we started and we never stop surprising ourselves”.

“We started with empanadas, choripán, with a very gourmet style, puddings, homemade desserts, milanesa sandwiches, mate, hot and cold cooked mate. I used to joke, as I told you at the beginning, that I dreamed of seeing the residents of Batavia sitting in the parks drinking mate, hahaha”, reveals Silvia, and adds: When we started the choripán nobody knew it, it was a rarity, people didn't have no idea. We offered them the homemade chimichurri that we made and they looked at us. But when they tried it, it didn't fail , it's irresistible, hahaha. My husband also prepares it, apart from the subject of science, he is also passionate about cooking”.

The mate was another master key to arouse the interest of the people who went to the place: “A large number already have the habit of drinking mate. The idea that we want to put into practice is to invite people to drink mate with their own teams and also teach the Spanish language and practice it. It is a project that was postponed by the pandemic. But not to earn money with paid classes, with the goal of social and cultural gathering. People thank us for the place, the way they are served, they ask what choripán means. Mate attracts a lot of attention and I explain to them, it is a fascinating experience”.

"Social matters to us, we always try to help and support small business entrepreneurs, especially if they are women, or from a minority, we are concerned about giving a hand to people who need it" , explains Silvia and adds more ideas: "My daughter and our whole family works to make Batavia better known. That is why we think of this different undertaking with a very Argentine touch and style. That it will represent a challenge and boy is it. She married Danny, a native of the city who is fifth generation, and my granddaughter Luciana who is already fifteen months old gave rise to the sixth. Batavia is a small city, near the laboratory where my husband works, a place that has its own center, 45 kilometers from Chicago, there is a lot of green, a lot of charm. It is a place where young people settle when they decide to get married, instead of staying in Chicago, which is expensive . The houses are cheaper, there are good schools.”

Lucas from Gonnet where he lives does not stop looking for new ideas to develop in Batavia . “I am permanently connected with my aunt and my cousin, attentive to adding, there is a lot to do because the problem of inflation is not there. I try to collaborate to achieve the expansion and dissemination of that culture and tradition that my family generated, trying to reinforce the project at a commercial level with the distribution of new products”, summarizes García Sánchez.

“How is a day here in Batavia? In winter hard because it can get to 20 degrees below zero. The cold and snowfall last between three and four months. You get up and you have to clean your sidewalk, otherwise you can't leave your house” , answers Silvia. The rest of the year, very different. But beware, people in general have the idea of the United States as Hollywood or Miami and nothing is so fantastic. There are good and bad things everywhere, not everything is great in the rest of the world and bad in Argentina, on the contrary. Our people have human values and excellent professional conditions. In our eating house there are four of us who work . A total of 25 people can sit and the same number on the patio. In the summer it gets crowded. We also sell wines from small vineyards, the key is that small quantities can be imported”.

The family was also inspired by some trips he made touring Argentina. And he says that he tries to encourage help and social exchange . “We filmed and were very inspired by the trip we made with Lucas in Chaltén and San Martín de los Andes, visiting locals and chatting with owners trying to link them and help them with their native products. The idea is to generate connection, cooperate with another sum, it is not competition, on the contrary. Not everyone has that cooperative philosophy: for us it is the key to success, a paradigm shift”, describes Silvia.

In addition to choripán and mate, empanadas are also all the rage there, according to Silvia: “They represent a delicacy for them, I assure you. They even choose them for Christmas dinner, it represents a special meal, unusual and exquisite. We make them very traditional, meat with raisins, egg and olives, chicken, ham and cheese, humitas, spinach and cheese and onion and bell pepper for vegetarians. We have as clients many Argentinian couples married to Americans or Americans who are desperate because our marketing is to make everything as homemade and healthy as possible, very native, which is what people love. We are also experimenting with dulce de leche, another hit."

“What do they lack there in the distance, what do they miss?”, we asked Silvia. “The warmth of my family, I miss her so much. We have friends in Batavia, but the ones you make as a young man are irreplaceable. We are very welcoming of people at home, especially the new colleagues from my husband's laboratory, where people from all over the world work”, she summarizes.

Lucas, his nephew, contributes to the outcome: “They are my uncles, my cousins, my niece, I miss them too, but they are happy there, they develop a commercial project but also very inclusive and humanitarian, caring about minorities. They also added other customs, they never left theirs, they continue speaking Spanish, drinking mate and making roasts with chimichurri, hahaha.”

See also  Samsung Unveils Galaxy Book2 Pro Laptops with 12 Gen Intel Core Processors and 13.3 and 15.6 Sizes"
Share
Facebook
Twitter
Pinterest
WhatsApp
Previous articleWhat happened to Iván Armesto, the Asturian who participated in the first edition of Big Brother
Next articleKiosk where Congolese were killed will be turned into a memorial
Admin
Hi, I am Seo expert, an MCU geek, a Star Wars fan, With more than 5 years of experience in the field of entertainment journalism and 28 years of experience in being a movie and TV show geek, I contribute to cuopm.com as its Cheif-Editor. My work here is to provide you with the craftily selected pieces of news from the Entertainment industry so that Pamdemocrat can be your ideal spot for all the latest Hollywood buzz and gossips. Ping me on my email ID below and let's discuss the latest theories and your favorite moments from my favorite TV shows and movies.
RELATED ARTICLES
Technology