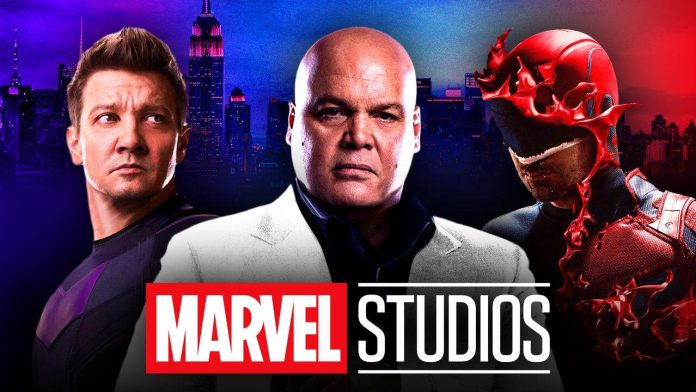 The rumor mill about “Hawkeye” has been simmering for a long time. Will Vincent D’Onofrio return as Wilson Fisk, aka Kingpin on the Disney + series, picking up where the Netflix series “Daredevil” left the character? In episode 5, we finally get answers. Warning, spoilers.

Yelena Belova (Florence Pugh: ” Black Widow “) seeks out Kate Bishop ( Hailee Steinfeld ). She informs her that they have been hired to kill Clint Barton (Jeremy Renner). Kate questions whether the client can be trusted, and Yelena takes this to heart because she researches without further ado.

She finds out that her anonymous client is none other than Eleanor Bishop (Vera Farmiga), Kate’s mother. Kate is shocked and shows Clint the chat because Yelena has added a picture of Eleanor with a tall, bald man in a white suit.

Clint is concerned. It is the Kingpin, and he had tried to beware of this all the time because now Kate and Clint are deeper in the shit than he had initially assumed.

The pixelated picture on the cell phone does not show whether it is the same Kingpin as from “Daredevil,” but Vincent D’Onofrio’s name is mentioned in the credits. We can be sure it’s a reunion with the beloved villain.

But that’s not all. Fisk’s adversary Matt Murdock alias Daredevil (Charlie Cox), should switch from Netflix to Disney +. Daredevil is slated to appear in 3 Disney + series and a movie.

Hawkeye: Is It The Same Kingpin As “Marvel’s Daredevil”?

With the opening of the multiverse, almost anything is possible in the MCU. But it will certainly not be the same variant of the Kingpin as the Netflix series. In ” Spider-Man: No Way Home ” the old “Spider-Man” films with Tobey Maguire and Andrew Garfield find their way into the MCU and are labeled as parallel universes.

It will probably be similar to the Netflix series and their characters. The characters we now know in our universe look the same, have the same names and have a similar story. But there are different variants than the ones we learned on “Daredevil.”

Share
Facebook
Twitter
Pinterest
WhatsApp
Previous articleAvatar 2: What Will Happen In Part 2 Of The James Cameron Film?
Next article‘Spider-Man: No Way Home’ Ending Explained! What Happened In The End?
sonu
sonu is a content writer who had worked on various niches. And served many clients. He is a management student also interested in research and marketing. His hobby is writing, reading and sketching. He is also a good orator.
RELATED ARTICLES
Entertainment