Harley-Davidson brings Pan America to Brazil in the 2nd semester 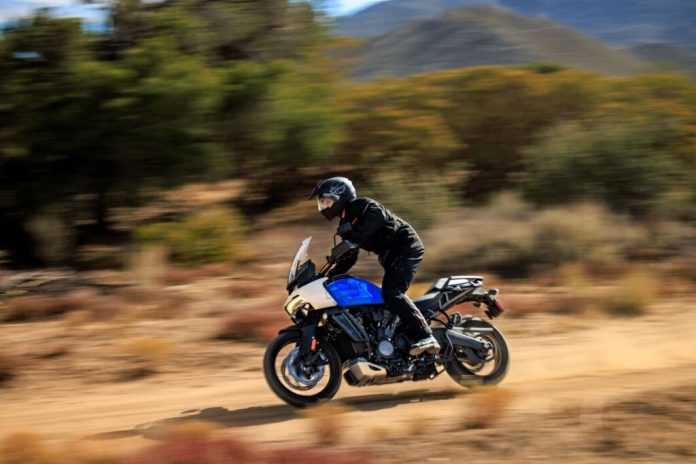 Harley-Davidson revealed its 2022 line and confirmed three new features for the Brazilian market: the reformulated Low Rider S, CVO Road Glide Limited and Pan America. The first two arrive in the country in the first quarter, while the adventurer arrives in the second semester, but her presentation will take place “soon”.

The power plant is associated with a 6-speed gearbox with a slippery clutch and assist, to control slippage in shifts, allowing sudden downshifts and preventing rear wheel lockup and loss of traction.

The Pan America tank has a capacity of 21 liters of fuel. It uses Showa-signed forks with a 47mm inverted front fork and 190mm of travel with preload adjustments. Its brakes are from the Italian Brembo and use 4-piston radial monoblock calipers on 320 mm front and 280 mm rear discs. The wheels are 19 inches at the front and 17 inches at the rear, both shod with Michelin Anakee Wild tires.

The Pan America that will be launched by Harley-Davidson in Brazil should already have the improvements that were made available by the brand abroad, such as a redesigned panel with a better reading font, a new adjustment for the functioning of the ramp start assistant and the new color option that mixes shades of blue and white.

In addition to Pan America, Harley-Davidson will make available new products for the Low Rider S and Road Glide CVO in the Brazilian market. They should arrive at dealerships of the North American brand in the first quarter.

The main improvement that the two will receive is the adoption of a more powerful engine, the Milwaukee-Eight 117, capable of producing 5% more torque than the current 114. It is a 1,923 cm³ V-Twin engine with cooling that delivers maximum power of 105 hp at 5,020 rpm and 17.1 kgf.m of torque at 3,500 rpm. The plant received valve improvements to provide more performance, as well as a new air filter.

For the Low Rider S, Harley-Davidson prepared some visual changes, such as changing the position of the instrument cluster, which was moved from the fuel tank to the center of the handlebars, in order to make it easier to read. The suspensions have also been revised to better handle the extra power of the new 117 engine, while the brake discs are bigger, now 300mm.

The new Road Glide Limited CVO is intended to reach a more premium audience, and will feature paintwork reminiscent of custom motorcycles and items such as the Boom! Box GTS, equipped with Rockford Fosgate audio and Bluetooth connectivity, electronic safety systems such as traction control and improved ABS brakes for cornering.

Share
Facebook
Twitter
Pinterest
WhatsApp
Previous articleBahia starts search for the penta do Nordestão in front of Campinense
Next articleMany people die during sex every year; find out why
Admin
Hi, I am Seo expert, an MCU geek, a Star Wars fan, With more than 5 years of experience in the field of entertainment journalism and 28 years of experience in being a movie and TV show geek, I contribute to cuopm.com as its Cheif-Editor. My work here is to provide you with the craftily selected pieces of news from the Entertainment industry so that Pamdemocrat can be your ideal spot for all the latest Hollywood buzz and gossips. Ping me on my email ID below and let's discuss the latest theories and your favorite moments from my favorite TV shows and movies.
RELATED ARTICLES
Sports