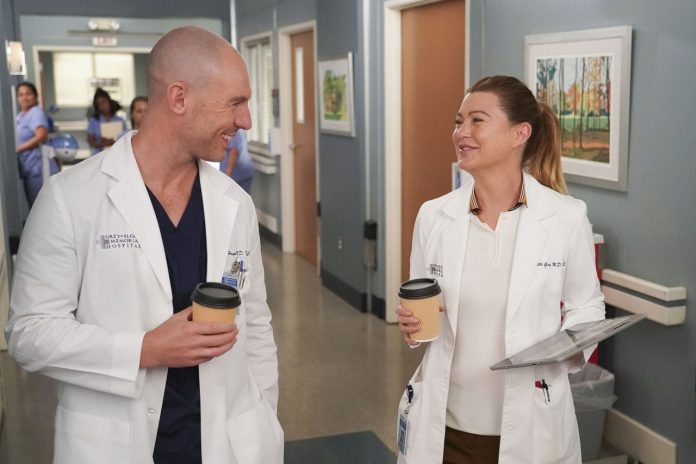 After a two-week break, episode 7 of the 18th season of ” Grey’s Anatomy ” was shown on US broadcaster ABC. In “Today Was a Fairytale” Jo and Link spend a day in the park with Luna and Scout.

Prince Jeremy falls during the performance of Rapunzel. Jo and Link rush to his aid and can revive him after a cardiac arrest. Teddy then operates on Jeremy in Gray Sloan.

Link admits to Jo that he used to have a crush on her. Then Jo begins to see him in a different light. But Link loves Amelia and realizes that he doesn’t have to marry her.

Meanwhile, Maggie and Winston celebrate their reunion in bed. Meredith has stayed in Minnesota so Bailey and Lin have to go to the convention to recruit doctors.

David pressures Meredith to deliver results on Parkinson’s study. So she agrees with Amelia’s suggestion that she and Kai do the research that day. And the two really make a breakthrough.

Meanwhile, Meredith is persuaded by Nick to operate on his best friend Bryan without knowing about the relationship between the two. Bryan survived the operation well, but Meredith is upset that Nick didn’t tell her the truth.

At the end of the episode, Meredith returns to Seattle and apologizes to Bailey for her absence. She also tells her that Nick’s resident Jordan Wright wants to move to Gray Sloan because of Bailey.

Grey’s Anatomy: The Way to the End – Meredith is already in the driveway!

When Meredith’s career started, she was ambitious, emotional and did not always know how to deal with her losses and blows of fate. In season 18, a lot changes tremendously. Meredith falls ill with Covid-19 and receives visits from her sister, mother, Derek, and other lost people during her feverish dreams.

When she recovers from the disease, she is reborn. She feels that she wants to do something meaningful. But she also knows better to appreciate what she has and what she had. She also seems to have made peace with her former self and her mother, with whom she had fallen out all her life.

Meredith decides to split her life between Seattle and Minnesota. She wants to work on a cure for neurodegenerative Parkinson’s disease in Minnesota. Will she win a second Harper Avery Award like her mother?

It shouldn’t matter to Meredith whether she wins another award. The times designed for success are over. For Meredith, this is about something more important: She wants to make her contribution and create something with which she can help. Especially since it is a neurodegenerative disease.

Meredith’s mother, Ellis Gray, also suffered from a neurodegenerative disease, Alzheimer’s. If Meredith found a cure or even an approach in this area, she would not only reach a climax in her career and medicine but would also personally heal a wound.

Meredith never really got along with her mother, and Alzheimer’s disease made it practically impossible. Now she has the chance to fix such problems for future generations and can come to terms with herself and her relationship with her mother.

Share
Facebook
Twitter
Pinterest
WhatsApp
Previous articleThe Woman in the House: Netflix Announces New Miniseries
Next articleThe Sex Lives Of College Girls Season 2: Renewed At HBO! Release Date Updates
sonu
sonu is a content writer who had worked on various niches. And served many clients. He is a management student also interested in research and marketing. His hobby is writing, reading and sketching. He is also a good orator.
RELATED ARTICLES
Entertainment