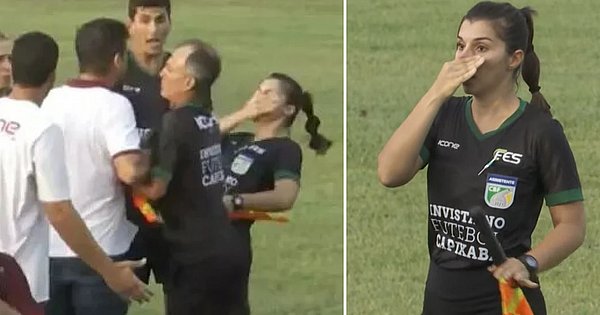 The scene of the traumatic episode she suffered last Sunday does not leave Marcielly Netto’s mind. The referee’s assistant was hit with a headbutt by Rafael Soriano, then coach of Desportiva Ferroviária (and later fired), at halftime of the match valid for the quarter-finals of the Campeonato Capixaba. The episode of violence impacted his life, but it will not make the linesman leave football. “I’m going to go back to work normally. The aggression did not discourage me at any time”, says Marcielly in an interview with Estadão. “I believe, of course, that things will happen slowly because everything has its time, but I intend to go back to work normally”, reiterates the assistant, who underwent a forensic examination this Monday (11), after making the police report. According to the summary of referee Arthur Gomes Rabelo, Rafael, who was sent off, intimidated Marcielly before hitting her with a headbutt.

“Assistant Referee No. 01 Marcielly Netto walks in front of him to push him away and ask for calm, and he says ‘take your hand off me, just because it’s a woman you’ll keep touching me, fuck you'”, he wrote. the judge in the document.

“The assistant then says ‘you can kick him out, he can’t be here and still complaining and cursing me’. Just as I take a step back to pull the red card, the coach runs towards her and headbutts her. on the assistant’s nose, being restrained by Assistant Referee n° 02 Márcio Berger”, continued the referee. According to the match referee, the coach was removed by the athletes, but returned to say “that he had not attacked the assistant and that she was faking the aggression”. Although the images clearly showed his aggression, the coach even promised that he would sue the assistant if she said she had been attacked by him. He also said the little flag was “wanting to take advantage of a situation because she’s a woman”. The headbutt hit the tip of Marcielly’s nose. She was shaken by the tantrum of which she was the victim and was also surprised by the repercussion that the case gained, including internationally. “I never imagined going through this, even more coming from a team leader, from a professional coach”, she pointed out. The case reached the Ministry of Women, Family and Human Rights, which demanded measures from the authorities and said it was “available to provide any assistance” that the linesman deems necessary and promised to send a letter to the Espírito Santo Football Federation, the Brazilian Confederation and the Court of Sports Justice to request “exemplary punishment for the aggressor”. Shaken, Marcielly hopes that this incident in which she was involved will not be repeated in the future. The assistant wants women not to be victims of aggression in football and beyond. “Let this serve as an example for the future,” she says. After the episode, Marcielly filed a police report and, this Monday, underwent the forensic examination. “The measures have already been taken”, she says. “The next steps don’t know yet.”
fired and suspended
Rafael was fired hours after assaulting the assistant and suspended preventively for 30 days by the Court of Sports Justice of Espírito Santo (TJD-ES) this Monday. Eduardo Xible Salles Ramos, president of the court, accepted the prosecutor’s request, based on article 35 of the Brazilian Sports Justice Code, to suspend the aggressor. In the decision, Salles Ramos said that the fact “is extremely serious”, stated that the “aggression must be exemplarily punished” and classified the act as “criminal”. If convicted, Rafael will be punished with a minimum suspension of 180 days. Desportiva Ferroviária, then coached by Rafael Soriano, lost the match 3-1 and was eliminated from the Capixaba Championship. Nova Venécia had won the first duel by 2-0.

See also  Monster Musume Season 2: Release Date, Plot and Teaser
Share
Facebook
Twitter
Pinterest
WhatsApp
Previous articleBritney Spears reveals that she is pregnant
Next articleGoPro Releases Hero10 Black Bones for Installation on Drones
suddz
Sudeshna is an engineering in making but has is keen towards writing blogs, news articles, product reviews and more. You would find her making use of the pen and paper in her free time.
RELATED ARTICLES
Entertainment