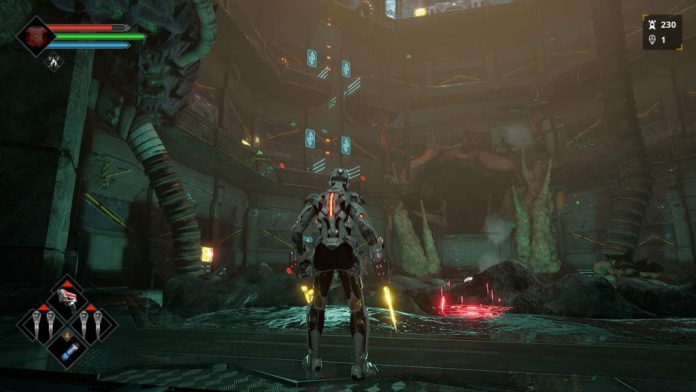 “I'm going to reduce the amount of 'souls-likes' I cover”, I told myself in 2021. I start 2022 by playing a “souls-like”. Ironic, no? I make a big exception for Dolmen ( PC / PlayStation 5 / Xbox Series X) because it is not only in production by the Brazilians at Massive Work Studio, but also because it is one of the few that didn't make me feel completely bored.

Let's be honest, the basic formula of a souls-like is already more than beat – so much so that I avoid using the term as much as possible, since for me it has lost all meaning. Dolmen deserves to be named one for at least trying — and in many areas — to add new ideas, and not using the nomenclature as a gimmick for “a 'hard' game that happens to have a stamina bar and you lose whatever the essence that is used to level up on death'”.

But I will not put the cart before the horse. Before I even noticed the new mechanics, Dolmen was already promising me something “different” within this subgenre: a sci-fi setting, a planet taken over by strange beings, and mysteries after mysteries. The preview version, sent by Prime Matter, let me explore two very different areas. The first presents the beginning of the protagonist's story on the planet of Revion Prime, while the second explores further how the story will evolve when your character is at a reasonably high level.

"Okay Lucas, but so far this sounds kind of… safe." I know! However, Massive Work Studio takes what sounds safe and uses its strengths to develop an aesthetic that doesn't necessarily match what you'd expect from a "souls-like". The ghoulish corridors and environments are still present, of course, but they're very well punctuated by brighter areas and zones that trick you into imagining you're exploring a secret research area. The effect is accentuated by the often uniform lighting and how “sterile” the areas appear.

Massive Work Studio uses the setting as a great prank too. In several moments I felt myself “letting my guard down” and being caught off guard by some monster that jumped out of where I least expected it. It wasn't scary enough (phew), but being caught off guard in a style of play where you're already so used to assuming trap locations is a great and much-needed change of pace.

But, as I alluded to at the beginning of the article, the most important change Dolmen makes isn't necessarily the setting or the visuals — as much as I'd like to take my hat off to both — but rather taking the formula and playing with the use of "stamina." ” and energy, the equivalent of “mana”.

Rather than treating them as separate elements, Massive Work Studio makes them important at different times. Stamina determines how many hits you can take before running out of breath; energy is used as a base element for you to recover your health and also to activate elemental abilities – which are nothing more than equippable reactors in the character customization screen.

As someone who loves to dig into figuring out the best way to take on a boss or improve the character, the abundance of elemental abilities in Dolmen is such a blessing. Every enemy I've faced is weak against a certain type of element. And when I say weak, I mean: it can be the difference between passing an area without the slightest headache and having to find a route or strategy to dispatch enemies to another world.

Anyone who knows me knows that I didn't write the above paragraph before I was one hell of a headstrong, banging my head against a wall, switching weapons dozens of times, and going "why the hell isn't this sword/rifle/pistol doing the damage I want?" I want?". It took me a while to understand what Dolmen wanted from me: experimentation.

While it doesn't do this in all its facets — certain types of gear still require specific attributes to be viable — having this motivation to switch elements without having to go through the trouble of re-examining your entire build is, in my view, , crucial to propel the player to think of different ways to solve situations. Too many “souls-likes” and derivatives tend to get you too stuck in one style for the rest of the campaign.

The icing on the cake when it comes to customization in Dolmen is its crafting system. If having the chance to experiment with different forms of combat without fear of being punished is good, having a crafting system that follows a similar line makes this the style that interests me most in the future of “souls-likes”.

Such concepts were further explored in the second area of the preview version, which swapped monster-infested corridors for an open area with digging machines, dozens of enemies that could be described as "humanoids", and a good dose of traps. In this area my character was already level 38 and with very different equipment from what I saw at the beginning. Although some of them were similar in appearance to the first area, many were inlaid with special materials that increased the physical damage of certain elements, reduced my stamina consumption or even energy.

Again, it's a concept that has been explored multiple times in games, with one of the best examples being Nioh 1 and 2, but Dolmen adapts his proposal so that switching weapons or armor is not so scary and still impacting the game. enough to change the perception of challenges on maps. There are exceptions — like swords or rifles that require the use of two hands and require more investment in both materials and experience — but I can see most people who are interested in Dolmen having a good deal of fun figuring out which combination works best for them. suits specific opponents.

Now, for all the well-structured systems that Massive Work Studio introduced me to in Dolmen, there's one crucial system that doesn't satisfy me as much as I'd like: combat. I attribute some of the problems to it being a preview version, as the differences between the first zone and the second zone were glaring. In the first one I felt that each weapon had a weight, the enemies reacted to the attacks, you could feel the impact well and there was room to breathe. In the second, it was a total “god help us” that was frustrating. The "humanoid" enemies practically ignored the attack animation; other times I saw my damage not being counted or even having my animation “canceled” by an opponent's attack, but without the necessary visual feedback to understand what was happening.

Such a discrepancy is even better seen in the two bosses present in the preview version. The first, a peculiar form of an arachnid, had a heavier, more calculated movement — to be expected, given that he appeared to be the game's first boss — but also had better animation when attacked. The second one was pure suffering to understand how to defeat, since many of his attacks were difficult to be "read" due to erratic movement, visual effects that do not match the distance of the attack, and other details that are precisely that "special spice" ” that turns a good fight into a fantastic fight.

Because of that, I reserve my final judgment on the Dolmen combat when I have the final version in my hands. But overall I have to say I'm pretty happy with what I've seen so far. Dolmen's aesthetic is interesting enough to keep me invested, its systems are already very well grounded and intriguing; their maps have multiple paths — some of which are barred in the preview version — that give me that little itch of knowing what's behind a door. I say with the fullest conviction, it's not easy today a "souls-like" to arouse that kind of reaction in me.

It's still too early to tell, but I wouldn't be surprised if Dolmen ends up being one of the big surprises of 2022, even in a year where we have Elden Ring.

See more images from the preview version of Dolmen below:

Share
Facebook
Twitter
Pinterest
WhatsApp
Previous articleBitcoin South African System: Value Your Money!
Next articleBitcoin Super Star Review: Get to Know the Truth!
Admin
Hi, I am Seo expert, an MCU geek, a Star Wars fan, With more than 5 years of experience in the field of entertainment journalism and 28 years of experience in being a movie and TV show geek, I contribute to cuopm.com as its Cheif-Editor. My work here is to provide you with the craftily selected pieces of news from the Entertainment industry so that Pamdemocrat can be your ideal spot for all the latest Hollywood buzz and gossips. Ping me on my email ID below and let's discuss the latest theories and your favorite moments from my favorite TV shows and movies.
RELATED ARTICLES
Technology