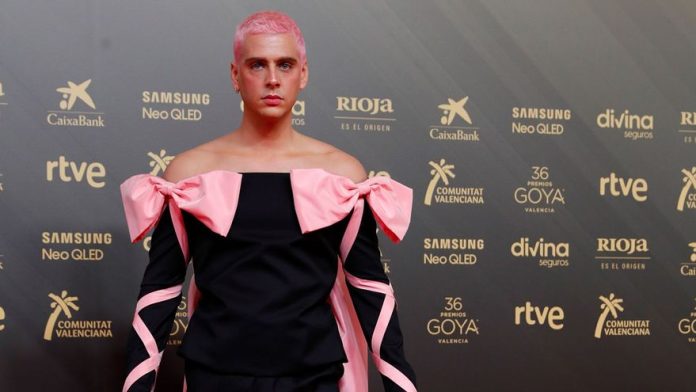 actor and film director Edward Casanova He has denounced on his Instagram account the homophobic attack suffered by a user who insulted and criminalized him, after his appearance this weekend on the red carpet of the Goya Awards in Valencia, and questions the National Police for these events. “The Goyas are always a special night almost never without controversy. And I understand it. There are always comments of all kinds, especially because of your way of dressing. The good ones (which this year have been many) I thank them from the bottom of my heart, and the bad ones, I deeply respect them because for tastes, colors”, says the artist in one of the ‘stories’ of his Instagram account. The director of the risky and controversial film ‘Pieles’ (2017), one of the most remembered actors of the series ‘Aida’ for his character of Fidel, explains to his followers that he had received serious insults of the user clara._3405, who calls him “sidoso, cynical and playful”.

“I will not consent to messages of deep hatred like the following: ‘HDP returns the money you lost on your shitty movie. It’s everyone’s money,'” fromannounces the filmmaker, showing a screenshot of the message made directly from his mobile, despite the fact that he “never” usually pays attention to this type of comment, he adds. Casanova, in the process of editing his second feature film ‘La Piedad’, starring Ángela Molina, Ana Polvorosa and Macarena Gómez, states in one of those brief communications on Instagram that he makes “available” to the National Police the user’s profile. “The serophobia it is very dangerous and further contributes to the stigma of HIV-positive people. This message is absolutely unjustifiable. It is a message of homophobic and serophobic hate, and I think that together we must denounce this person and make him understand how confused he is, how old he is and the damage he can do, “adds the actor. The interpreter attended the gala of the Goya Awards on February 12 with a black tuxedo without lapels, with large pink bows, and matching dyed hair, by the designer Jaime Álvarez for the firm Mans Concept, and which refers to the costumes for his new film, whose Casanova has also uploaded the first images to the networks.The actor has received messages of support in the same way, both on Twitter and on Instagram, although false information about the State subsidy to finish his first film is published through that same medium, such as that he had received a million euros, when in reality he only received 12,000.

See also  The best rated Ikea lamp for teleworking
Share
Facebook
Twitter
Pinterest
WhatsApp
Previous articleFrantic and messy: this was the first program of Momento D, the new cycle of Fabián Doman
Next articleOriana Marzoli and her ex-boyfriend end up at the police station for a "altercation"according to ‘Viva la vida’
sonu
sonu is a content writer who had worked on various niches. And served many clients. He is a management student also interested in research and marketing. His hobby is writing, reading and sketching. He is also a good orator.
RELATED ARTICLES
Lifestyle