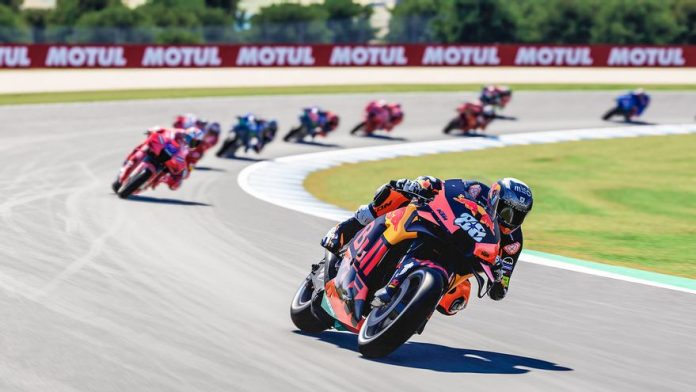 Ready for some spectacular racing action on two wheels? The first new generation gameplay video of ‘MotoGP 22‘, showcasing the editing enhancements along with two-player local split-screen mode, to race and compete with your friends right on the couch.

New facial animations, improved characters and 3D pit lanes; Ride height device, to manually operate and lock the RHD (Ride Height Device) locking mechanism and control the compression of the bike’s suspensions; Improved track surfaces for greater ease of driving; Improved suspension system for a better feeling when going over curbs; more realistic tire behavior, thanks to the deformation of the tires, making the experience much closer to reality. All this comes together in the delivery for the 2022 season.

As you may have already guessed, the game also includes the complete 2022 season with all the official content, including more than 120 drivers and 20 official circuits. In addition, there are more than 70 historical riders and bikes available. Manager Career mode (Managerial Career) is back, allowing players to create their own team or join a real one managing all aspects of strategy, from bike development to the dedicated staff that will support the rider. Here you can customize the season itself, choosing the Grands Prix you want to compete in from a series of different calendars. And, for the first time in the saga, it has the expected local split screen mode for 2 players, online multiplayer and cross-play through consoles of the same family. It will be released on PlayStation 4, PlayStation 5, Xbox One, Xbox Series X|S, Switch, and Steam.

See also  The delicious vegetable that you can grow at home without the need for an orchard, garden or terrace

Share
Facebook
Twitter
Pinterest
WhatsApp
Previous articleAtlético conquers Old Trafford and gets into the quarterfinals of the Champions League
Next articleSalvador continues with the ‘General Released’ strategy of the vaccine against covid this Wednesday (16)
sonu
sonu is a content writer who had worked on various niches. And served many clients. He is a management student also interested in research and marketing. His hobby is writing, reading and sketching. He is also a good orator.
RELATED ARTICLES
Lifestyle