Comeback of character in the first round of the European classic 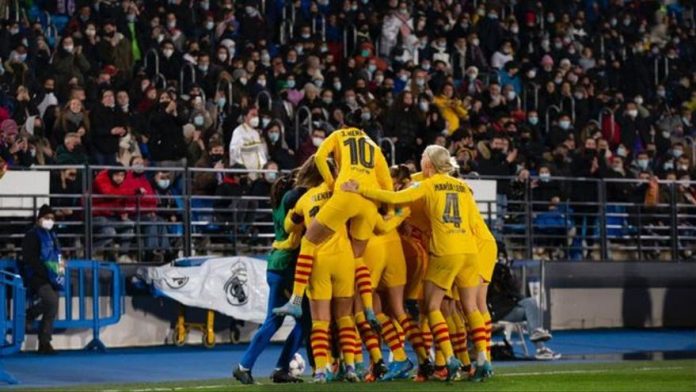 It suffered. And a lot. But the Barca managed to win a very important victory in the first round of the European Classic at the Alfredo di Stefano (1-3). Alexia’s brace and a goal from Claudia Pina neutralized Olga Carmona’s opening goal in the first half to reach the second leg with an advantage in the tie.

Giráldez came out with the gala eleven; he didn’t have many more options due to casualties. And despite having received a medical discharge, Irene Paredes started on the bench. Turn, again, for Pereira. The match began in Valdebebas with a very different atmosphere from the last Clasico that gave the League to Barça. The sun and the party of the culés changed for the cold and rain of Madrid and a dedicated crowd that wanted to see how his team complicated the tie for the current champions and favorites. Toril’s approach, also very different. More similar to the league duel in December or the Super Cup. As expected. They had come out to play and not just to defend themselves. right from the start could see a Real Madrid dominant, with possession of the ball, and a more uncomfortable and misplaced Barça who tried to adapt his game to that of the rival. Inaccuracies, lack of intensity, losses in the center of the field and unusual defensive errors by the azulgranas. And in one of those the surprise jumped at the Di Stéfano. Esther took advantage of a bad pass from Alexia to Patri, found Olga Carmona and the Sevillian beat Leila and finished perfectly to send the ball into the back of the Paños net and score the first.

The surprise jumped in Madrid

With the electronics in their favor, the white team locked themselves behind. Barça tried to recompose itself and go out with voracity in the search for spaces. Little by little she was getting high. The azulgranas began to arrive with danger. First Rolfö, then Jenni. Accuracy was lacking in the last pass. Patri Guijarro also had it to equalize but Misa became huge and caught the powerful shot from the Balearic Islands. He chanted the name of the goalkeeper Di Stéfano.

Madrid returned to the charge and starred in a few minutes of siege of the Barça goal. Aitana and Leila got the yellow in their attempts to stop the cons of the white box. Esther was the winner of all duels with Pereira and had two very clear chances to widen the gap. The first ended at the post; the second, Paños was able to clear it. Barça was not there and they left defeated at half-time with a visibly upset Alexia.

The VAR appeared and Alexia tied

Madrid came out just as intense in the second half. Giráldez changes at halftime. Pina entered for Leila and Rolfö was placed on the side. All the left band for the Swedish. Barça felt better. A few minutes later controversy was sown and fate smiled in his favor. Olga’s knee to Hansen. The azulgranas asked for a penalty. And the VAR, which was released this season in the Champions League, notified the referee and this, after reviewing the play, indicated the maximum penalty. From eleven meters, Alexia did not fail. The best player in the world cheated on Misa and tied the match. Madrid reacted, encouraged by a crowd apparently very upset with the referee’s decisions, and went on the attack. Esther was left alone in front of Paños, who was outside the area, but the Alicante woman was able to cut off the attack. Immediately afterwards, Pina forgave the second with a shot after a pass from Rolfö that went wide over the crossbar.

Barça insistently sought to get ahead. PAitana’s high pressure trying to make Misa miss the ball. And the opportunities began to arrive. A shot from Jenni that went wide and a thread from Hansen that went over the rival goalkeeper. Giráldez gave entry to Paredes for Pereira. Barça felt safe at the back again and could begin to arrive more easily. He deserved the second. Aitana caressed him with a powerful shot from the front that went up. And Pina, who had improved the match for the azulgranas with his entry, was in charge of scoring and turning the score around. Barça came up. I was looking for the third. I needed it. Misa, heroine in Valdebebas, saved a clear chance with her fist under the sticks. But she couldn’t do anything at the last minute against the azulgranas. Pass from the death of Patri to Alexia and the captain, the usual one, defined perfectly to put land in between and sentence the game.