Carlos Sobera: “Since I have dedicated myself to production, I try to have a commitment to theater and Hispanic dramaturgy” 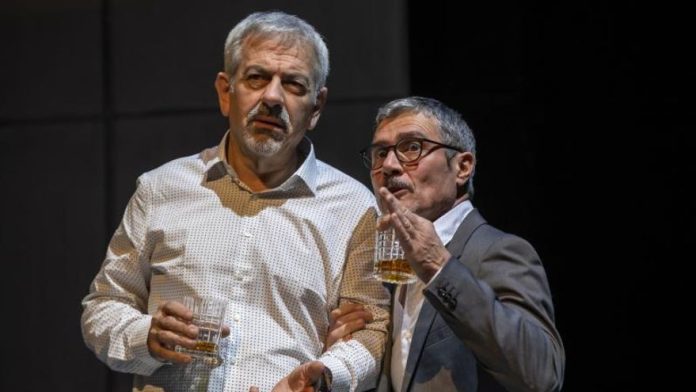 The actor Carlos Sobera (Baracaldo, Vizcaya, 1960) stars in and produces “Asesinos todos”, the comedy that the Palacio Valdés theater brings tomorrow, Friday (8:15 p.m.). He talks to LA NUEVA ESPAÑA on the phone.

-They premiered a year ago at a tough time, with limited capacity.

-Yes Yes Yes. We were about to… No, we weren’t about to. We gave him a brand new thought or not. Because we started the rehearsals in November-December of the year 2020 because we thought that by February things were going to be much better than they were later. But the famous third wave arrived. That’s why we even thought about not doing the show, but we decided to risk it because things had to be done and we got into trouble. At first it went very well for us -February and March-, but in April I don’t know if the fourth wave came (there were already so many). And there we suffer. Then we started the tour and we began to see reduced capacity, losing many places because they weren’t even open. It was a bit painful. We have been seeing the evolution of the pandemic and, at the same time, the evolution of people’s behavior. More and more cheerful and more eager to go out.

-I don’t know who was more afraid, you, the actors, or the public?

-I think that the general public was afraid to leave the house: because they didn’t trust it, because there was an absolute lack of control and contradictory information. It was a tremendous mess. That’s why people were confused. And this pulls you back and represses you and you end up staying at home and giving yourself a little bit of security, but once I was in the theater, people got into their seats following the instructions on the masks and so on. She looked very relaxed and since we did comedy, we saw that people broke the box just like when there was no pandemic. So we told ourselves: “What is clear is that once they arrive, they arrive well”.

-Is he rarely seen in theaters or am I confused?

-Every two and a half years I do a show. The last one was “Cinco y Acción” that I did with the marriage of Marta Hazas and Javier Veiga. We premiered in 2016 and we were with her until almost the end of 2018.

-What should the works have to get you off television?

I started doing theater when I was 18 years old.

-It is always said that the theater is the mother of the actor because in the theater it is where you are most naked and, therefore, you show yourself as you are. And, later, because the theater is probably the first rung of art. Making movies or making television is more complicated because you depend on third parties. You can always do the theater yourself, organize your own group. When you’re a young kid, this is a way to enter into a fight with art and dramaturgy. I like the theater because of the contract with the public and then also because the functions that are well written are a joy to play and they give you an intensity that is not easily achieved in cinema and television either because they go with unity of action and this is also priceless. The unit of action: it begins and ends. And you own the whole process and it’s very fun and very fulfilling.

-Yes, but what does the montage have to bring to make it yours?

-I always choose comedy and I almost always choose a Spanish author because since I have dedicated myself to production I try to have a commitment to theater and Hispanic dramaturgy. I prefer to premiere a Spanish text by a young author, or not so young, who is currently writing than not to repeat a well-known title that is known to work because it is wonderful.

-It is that “Hamlet” is already very done. I should have a huge need to do a “Hamlet” or a vision very different from what we have seen to get with it. Someone must have the initiative to bet on the talent and the current dramaturgy. Shakespeare, in his day, had somebody bet on him. I’m telling you: I’d rather make absolute premieres than not repeat “A View from the Bridge”, by Arthur Miller.

-The one presented here is a text by Jordi Sánchez and Pep Antón Gómez inspired by “Strangers on a train”, right?

-Not quite. This is the story of two married couples who have everything in life and who, from one day to the next, lose everything. And that is why they make a very drastic decision: kill those who are hindering them so that things remain the same. At this point it reminds a bit of “Strangers on a train”, but we have a wonderful comedy by Jordi Sánchez and Pep Antón Gómez in which we see the place we are willing to go when things go wrong.

-The theater supposes a liberation from the day to day of TV?

-Yes, but I confess one thing: the tour is more liberating than going to the theater every afternoon in Madrid. In Madrid you end up getting a little bit of the civil servant complex because in the end it’s like going to the administration window. The tours give you that spirit of freedom of the rockers who go from one city to another, meeting new people, new theaters, different audiences and even different restaurants. All this gives a point to the very interesting theatrical activity. Probably the best thing about theater is to tour the country and the whole world if possible. Being in a place so that people come to see you is fine for a month, two months, but nothing more. possible.

Share
Facebook
Twitter
Pinterest
WhatsApp
Previous articleAtlético will play it at Old Trafford after signing a draw at the Metropolitan
Next articleLionel Messi’s boot ‘disappears’ in official PSG photo; understand
sonu
sonu is a content writer who had worked on various niches. And served many clients. He is a management student also interested in research and marketing. His hobby is writing, reading and sketching. He is also a good orator.
RELATED ARTICLES
Lifestyle