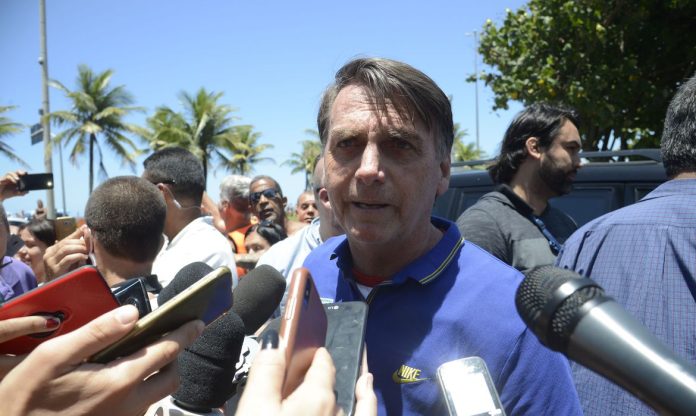 President Jair Bolsonaro admitted this Saturday (8) that up to 12 ministers must leave the government in the coming months to run for public office in this year's elections. The deadline for the mismatch of ministers is until April and the president said he hopes that everyone will stay in office until then.

"I'd like them to leave just a day before the maximum limit, so we don't have any problems. We've already started thinking about names to replace them, and some are already more than right. Most will be by internal choice, even because it would be one buffer term until the end of the year," he replied, as he attended the birthday party of attorney General of the Union, Bruno Bianco.

Bolsonaro avoided speaking in likely names to occupy the ministries to "avoid jealousy". He added that even parliamentarians will be able to fill the vacancies to be opened. "There are good parliamentarians. I was a deputy for 28 years. Everyone is a possibility (to assume a ministry)," he added.

Army
President Jair Bolsonaro said that the Army does not need to clarify the determination of vaccination against covid-19 for the return of in-person activities because, according to him, what exists is a recommendation and not an obligation to take the immunizing agent.

"It was a directive not from the Army, but from the Defense, which raised doubts. There was no requirement. I'm a Democrat. I've already heard of two state-owned companies that wanted to apply sanctions to employees who didn't get vaccinated. If the Army wants to clarify, that's fine. , but it's resolved, you don't have to explain it to anyone. It's a matter of interpretation," he replied.

See also  Chicago PD Season 9 Episode 9: When Will It Release? Where To Watch?

Inflation
ith double-digit inflation, President Jair Bolsonaro repeated this Saturday that he cannot table food prices like other countries – especially Argentina – that have tried to do so recently.

"Argentina announced that it would no longer export meat and other consuming countries came to pick it up here. This increases our price, but I cannot fix the price of meat. This is not the way. We know that the price freeze leads to inflation and shortages," he replied.

"If I say that, the dollar will go to R$ 8 and interest will also explode. If these people come back, they will blow up Brazil. They openly say they will censor traditional media and social media. They talk barbarity. We had examples. in the pandemic of what they can do, as we've seen the left-wing governors," he said.

Share
Facebook
Twitter
Pinterest
WhatsApp
Previous articleFortnite: Secrets and Tricks of Chapter 3
Next articleHow to optimize your audios before sending a “podcast” on WhatsApp
Admin
Hi, I am Seo expert, an MCU geek, a Star Wars fan, With more than 5 years of experience in the field of entertainment journalism and 28 years of experience in being a movie and TV show geek, I contribute to cuopm.com as its Cheif-Editor. My work here is to provide you with the craftily selected pieces of news from the Entertainment industry so that Pamdemocrat can be your ideal spot for all the latest Hollywood buzz and gossips. Ping me on my email ID below and let's discuss the latest theories and your favorite moments from my favorite TV shows and movies.
RELATED ARTICLES
Entertainment