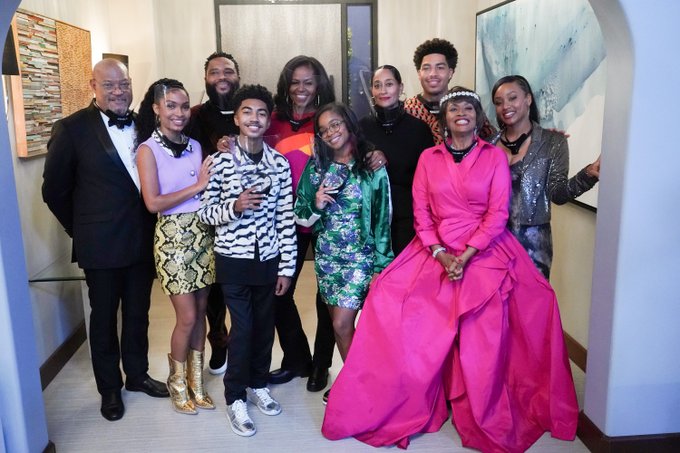 Michelle Obama will appear in the upcoming season of the ABC series “black-ish.” The former first lady of the USA will make a guest appearance when the comedy series enters its final round with season 8.

The sitcom, produced by Kenya Barris, deals with topics related to the zeitgeist. Viewers experience current events such as systemic racism, the COVID-19 pandemic, equality and the US elections through the eyes of the Johnson family. The serious topics are made accessible to the general public in a relaxed manner.

What Role Will Michelle Obama Play?

Michelle Obama will play herself in “black-ish,” that much should be said. However, it has not yet been announced in what form the Johnson family will meet Ms. Obama. She shared her delight in her new role on Twitter.

I’ve long been a fan of @BlackishABC’s wit and all-around brilliance, and it was such a thrill to join in for an episode. I can’t wait for you all to see it! ❤️ https://t.co/NsyN6KfpG4

The guest appearance in “black-ish” is not Obama’s first foray into entertainment. She has already worked as a producer on Netflix productions such as “We The People.” She has also made a guest appearance on the NBC series “Parks and Recreation.”

Black-ish Season 8 Will Be The Last

The show was renewed by ABC for an eighth and final season back in May 2021. The seventh season consisted of 15 episodes but was cut short due to the Covid-19 pandemic. On the other hand, the last season grabbed a six-episode lineup and is scheduled to premiere later this year.

See also  Pretty Smart Season 2: Everything We Know So Far

Over the years, the show has managed to be a part of the top 10 comedy shows and has been graced with several awards and multiple Emmy nominations. The popularity of drama revolving around an upper-class Black family resulted in Disney ordering a third spin-off titled ‘Old-ish,’ which is currently in development.

On the other hand, one of its spin-offs, ‘Mixed-ish,’ is awaiting confirmation about its fourth season.

Share
Facebook
Twitter
Pinterest
WhatsApp
Previous articleServant Season 3: New Teaser Reveals January Release Date
Next articleNetflix: Locke & Key Could Have A Crossover With Sandman
Admin
Hi, I am Seo expert, an MCU geek, a Star Wars fan, With more than 5 years of experience in the field of entertainment journalism and 28 years of experience in being a movie and TV show geek, I contribute to cuopm.com as its Cheif-Editor. My work here is to provide you with the craftily selected pieces of news from the Entertainment industry so that Pamdemocrat can be your ideal spot for all the latest Hollywood buzz and gossips. Ping me on my email ID below and let's discuss the latest theories and your favorite moments from my favorite TV shows and movies.
RELATED ARTICLES
Entertainment