Barça’s comeback to sneak into the Champions League final 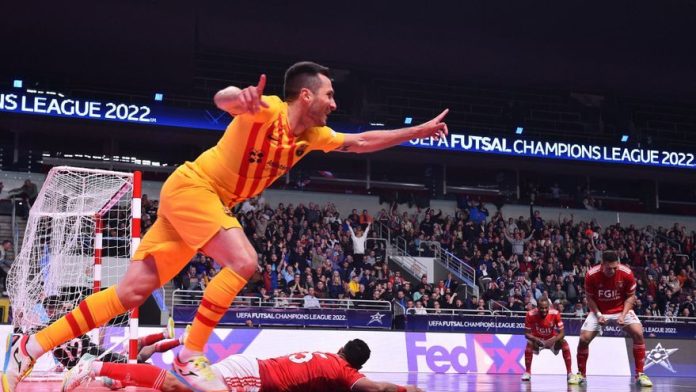 The Barca needed a heroic comeback and extra time to defeat 4-5 at benfica and thus achieve the pass to the final of the Futsal Champions League after losing 3-0 at halftime.

Adolfo, with 18 seconds remaining in extra time, scored the decisive goal that allows the azulgranas to have the possibility of taking revenge this Sunday against Sporting Portugal, with whom they will cross paths again in the decisive match after defeating them in the final last year. The semifinal was crazy. In the first 30 seconds, Benfica already had two clear scoring opportunities that they rejected Didac Flat. And at 41, the Barça goalkeeper committed a much-discussed penalty on Vinicius Rocha. To shoot it she entered the track expressly Hossein Tayebi and the Iranian got 1-0 by tricking Dídac. Barça’s response, also before the end of the first minute of hyperactive play, was a long shot from Andre Coelho, a former Benfica player, who crashed into the crossbar. But who struck a new blow was the Portuguese team, who made it 2-0 (min. 9) after a loss of the ball that Vinicius Rocha took advantage of, resolving with the toe against Dídac. The Barça players complained because, according to them, the ball went out of bounds when Vinicius Rocha recovered it. The first great Barça opportunity to close the gap was Adolfo (min. 12). Dídac looked for him long and the pivot controlled with his chest before turning and volleying a few meters from Andre Sousa, who showed extraordinary reflexes. But before the break Barça received another very hard blow. marcenium He hit the post with goalkeeper André Sousa outside his zone and on the counterattack Afonso Jesus took advantage of Dídac’s rebound from Vinicius Rocha’s shot to make it 3-0 (min. 17).

The second part started as electric as the first and at 21 seconds a shot from Matheus that hit the post before hitting André Sousa on the back was 3-1 (min. 21) and a great deal of hope for Barça. And it could have been greater if Ferrao hadn’t missed an empty goal from the far post (min. 26). Shortly after (min. 28) an error by Pito meant that Chishkala was left alone against Dídac, but the Vaseline he tried crashed into the crossbar and continued to give life to Barça, who took advantage of it. With 10 minutes to go, Ferrao a genius was invented to make it 3-2 (min. 31). The Brazilian finished off with a heel from the edge of the area, surprising Benfica. And the tie was not long in coming. A single play of Dyego it ended with a shot that crashed into the body of the ex-blaugrana Romulus, which left André Sousa sold (min. 35). moments later, Sergio Lozano he had a double penalty, but his attempt ended in the right post after lightly touching the rival goalkeeper. Thus, it was Dyego himself who turned the score around at 3-4 (min. 37) with another individual play that this time did not require him to touch anyone before the ball hugged the net. But the joy was short-lived. Chishkala, as goalkeeper-player, executed a very powerful shot that once again put the tables at 4-4 (min. 38).

Very little happened in extra time until Adolfo just had to push the ball into the far post with 18 seconds to go. to the end (min. 50) after a personal move by Dyego down the left wing. A) Yes, this Sunday Barça will fight to lift the fourth ‘Champions’ in its history against Sporting Portugal. The blanquiverdes beat the French ACCS 2-6 in the other semi-final of the ‘Final Four’, which the Raise u. The Granotas played the maximum continental competition as League runners-up, although they stayed in the Elite Round.

Incidents: Second semi-final of the 2021-2022 Futsal Champions League played at the Arena Riga in Riga (Latvia).

Esteban, against the BarçaBarça signed an incredible comeback (4-5) against Benfica to win in extra time of the semifinal of the ‘Final Four’ of the Champions League held at the Arena Riga, when they went 3-0 at halftime and reached get 3-4 before an extra time in which Adolfo was the hero. Levante UD FS played a Champions League as runner-up in the League until the Elite Round. One of those players, Esteban Cejudo, now at Sporting after leaving the Russian league, will face Barça tomorrow, Sunday, also his former team, as the Portuguese team beat ACCS Asnières Villeneuve 92 (2-6) in the other semifinal.

Share
Facebook
Twitter
Pinterest
WhatsApp
Previous articleThe head (and heart) of Boris Becker, a champion sentenced to prison: “I was too weak with my emotions”
Next articleThe surprising photo with which Chenoa and Elena Tablada have revolutionized the networks
mohit
I’m mohit, I am a professional blogger, Digital Marketer, and Certified Google Partner. I write about Business ,Tech News,Travel, Food Recipe, YouTube Trending Video and Health And Fitness here on cuopm
RELATED ARTICLES
Sports