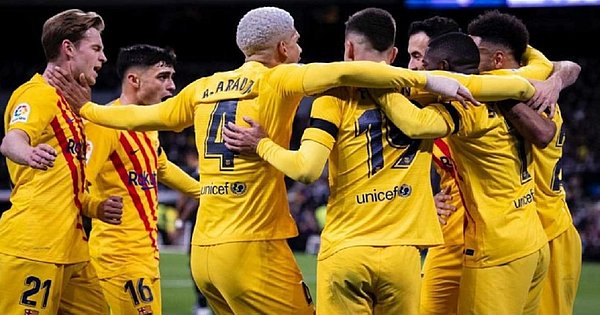 After six classics, Barcelona again beat Real Madrid. Earlier this Sunday night (20), the Catalan team strolled through the Santiago Bernabéu and thrashed their arch-rivals by resounding 4-0, highlighting the game scheme set up by coach Xavi, in addition to Aubameyang, scorer of two goals. now has 16 games in charge of Barcelona, ​​with 11 wins, four draws and only one defeat, a 77% success rate, with 37 goals scored and only 14 conceded The good campaign took the team from ninth place and placed it in third, with 54 points. There are already 13 unbeaten games. With the defeat, Real Madrid was left with 66 points, still in the isolated lead. In second place, Sevilla has 57. The difference to Barcelona is 12. However, the Catalan team has one less match and, if they win, they can enter the fight for the titleCarlo Ancelotti put in the field a team made up of four Brazilians , among them, Rodrygo and Vinícius Júnior in the attack. The most felt absence was Benzema, the main highlight of the season. On the other hand, no news. The focus was on the duo formed by Dembélé and Aubameyang. Under construction, the Santiago Bernabéu stadium had not hosted El Clásico for two years and, if it had been given a choice, it would not have hosted this Sunday’s game either. Barcelona were extremely superior and walked in Real Madrid’s field, showing great evolution under the command of the idol Xavi. The first half started frankly, with both clubs looking to attack. Valverde quickly put goalkeeper Ter Stegen to work, but it was Courtois who was bombed, who had to make great saves to prevent Barcelona from opening the scoring right away. on the right, he passed by Nacho and gave a beautiful assist for Aubameyang to anticipate Militão and make it 1×0. With Modric on a false 9, Real Madrid was completely lost and gave even more space to the opponent. In the 37th minute, Dembélé took a corner as Ronald Araújo climbed to the second floor to extend the score. Real Madrid still tried to draw a reaction with Vinícius Júnior, who wasted a good chance by playing in a bid with Ter Stegen, but without success. With the stadium silent, Carlo Ancelotti tried to change the team with some changes at half-time. But on the pitch, what was seen was a dominant Barcelona. The Catalan team scored the third in the first minute. After Real Madrid missed the ball, De Jong gave it to Aubameyang. The striker sent a letter to Ferrán Torres to make it 3×0. Aubameyang still had a goal disallowed soon after, which would complicate even more the life of Real Madrid. However, the rout was confirmed at seven, when Ferrán Torres crossed for Aubameyang, who sent over Courtois to make the fourth. The massacre continued until the end. Real Madrid was totally down, while Barcelona kept attacking and just didn’t do more for details. There was still time for the Brazilian Daniel Alves to enter the field and participate for a few minutes of the match.

See also  Let's explore the famous drama “The legends of the Blue Sea”:
Share
Facebook
Twitter
Pinterest
WhatsApp
Previous articleThe Lidl product that will allow you to save on heating and that costs less than 12 euros
Next articleThe Mac Studio has slots to replace or expand your internal storage
suddz
Sudeshna is an engineering in making but has is keen towards writing blogs, news articles, product reviews and more. You would find her making use of the pen and paper in her free time.
RELATED ARTICLES
Entertainment