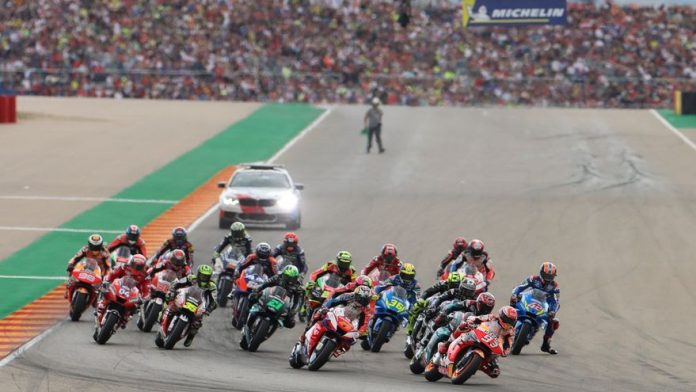 Deputies of the four parties that make up the Government of Aragon have guaranteed this Thursday in the Cortes lto continuity of the tests of MotoGP at the Motorland circuit until 2026. The previous step will be to definitively close the agreement with Dorna to organize the 2022, 2024 and 2026 races, in addition to go through the governing councilwhere the deal could be greenlit in two weeks.

The danger has passed for Alcañiz, where the news fell like a bomb on the first day of March, when all the groups of its city council signed an institutional declaration, without fissures, of support to the Ciudad del Motor after knowing that the project could have days to live. The contract with Dorna, concluded in 2021, had not been renewed and from the DGA there was talk of signing the 2022 commitment and leaving the future in the hands of the Government that is elected in the elections of May 2023. Many understood that the circuit was in danger , Javier Lambán left it in the hands of Aliaga, who went so far as to say that Motorland lives not only in MotoGP but guaranteed the future without framing it. This Thursday his party has done so in the plenary session of the Cortes, where Esther Peirat has advanced from the podium that it is planned to take to the Governing Council very soon the extension of the agreement to organize three great prizes in the next five years. Later other formations of the quadripartite have confirmed it, including some critics. Isabel Lasobras, from Chunta Aragonesista, stated that the Motorcycle World Championship “is not in any kind of danger” and that the current government is “committed”, so there will be no problems after 2023 if the same government continues. the socialist Ignacio Urquizumayor of Alcañiz, has said that all the good things that have happened to Motorland “have come hand in hand” with the PSOE and that there is now “a guarantee” that MotoGP tests will continue beyond 2023. That is to say , “in 2024 and 2026 there will be great prizes” in the Motor City.

See also  The false smile that is not missing

The good prospects have been accompanied by two demands: the request for a rigorous study on the impact generated by the races and the search for a viability formula for the circuit

The fourth leg of the quadripartite, Podemos, has remembered through Martha Prades that “more than 236 million public money” have been invested in the Alcañiz complex, so now it is “not drop this investment but make it more sustainable”, in addition to continuing to invest in R+D+i and collecting the added value that Alcañiz’s link has with the motor world. In addition, he explained that his party, through the Ministry of Science, has invested 3 million to provide the circuit with 5G technology and other knowledge generation agreements to “take advantage of the circuit beyond sporting events”. With the exception of Izquierda Unida, which has urged through Alvaro Sanz carry out a rigorous study on the impact of MotoGP in the territory, the future of Motorland has found support in all the parties despite the fact that the non-law proposal presented by the popular group did not go ahead.

Juan Carlos Grace Suso has been in charge of presenting in plenary the proposal to “convene a Board of Directors of Motorland Aragón to authorize the signing of the renewal of the contract, within a period of three months, which guarantees the celebration of the MotoGP world championship in 2022 , 2024 and 2026”, an initiative that has not gone ahead due to the votes against the parliamentary groups that support the Government, who have said that the future of motorcycles is already on the way to the Governing Council, and IU. Citizens and Vox have voted in favor. The popular deputy has recalled that the Aragon circuit is the only one in Spain that has not renewed the contract for five years, since “all the communities with great prizes know the positive impact” that this test has for their territory. “Each time the Government of Aragon contributes 7 million euros to the celebration of MotoGP, more than 30 million have an impact on benefits for the territory. New companies and new jobs have been created around the circuit, something that cannot be put at risk as is happening,” said the popular deputy. The curator has recalled that Motorland was born with some premises such as structuring the territory, developing the province of Teruel and Bajo Aragón or being able to celebrate the best world championships, so “putting MotoGP into question is putting these premises at risk”, In addition to accusing “a minority” of “destroy” the project from a distance “and ignorance” of what is happening in Alcañiz, capable of bringing together more than 130,000 people in a single weekend and more than 150 million people knowing where Aragón is thanks to Marc’s races Marquez and company. Vox has given its support to the future of the complex through Martha Fernandez, which has highlighted “the image of quality” that it transmits from Aragon and has even requested that some additional grand prize be requested. Finally, Jara Bernuesfrom Ciudadanos, has spoken of the “intangible” return generated by Motorland, the backbone project that seemed to be dying at the beginning of the month but which now only lacks the signature and approval of the Governing Council to continue in the elite until 2026.

Share
Facebook
Twitter
Pinterest
WhatsApp
Previous articleGiorgio Chiellini, devastated by Italy’s elimination from the World Cup, was blunt: “We are destroyed, there is a great void left”
Next articleThese are the high-waisted pants that stylize the most and that Queen Letizia wears
mohit
I’m mohit, I am a professional blogger, Digital Marketer, and Certified Google Partner. I write about Business ,Tech News,Travel, Food Recipe, YouTube Trending Video and Health And Fitness here on cuopm
RELATED ARTICLES
Sports