Antonio Resines, crier of the San Isidro festivities in Madrid 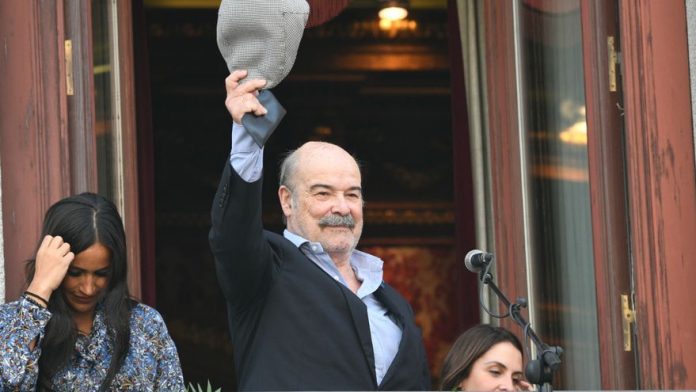 The actor Anthony Resines has reminded the public health doctors and has asked to enjoy the San Isidro festivities with “caution and head” in his proclamation, with which he gave the kick-off this Thursday to this celebration in honor of the patron saint of the city of Madrid. The act has begun with four giants, two of them dressed as chulapos, in the Plaza de la Villa to the rhythm of traditional music. After that, the crier has welcomed these parties surrounded by the entire municipal delegation chaired by the mayor of Madrid, Jose Luis Martinez-Almeidaand the deputy mayor, Begoña Villacís, among others.

In front of more than a hundred people, Resines began his speech by thanking the public health system that “saved his life”. Specifically, the organizers of the doctors’ strike have called to go to the Plaza de la Villa to thank the actor Antonio Resines for his support. The actor began his speech by recreating a sequence from Welcome, Mister Marshall by Luis García Berlanga with the opurpose of paying homage to a genius he has “admired”, as well as “all those who dedicate themselves and have dedicated themselves to this trade, the cinema”. Resines has stated that is “very proud” to belong to this sector for 40 years. “It is a true honor to be here today, you do not know how excited I am. Although I was born in Cantabria (…) I have always lived in Madrid,” he said.

Living in Madrid is “a pleasure and a luxury”

Thus, he has specified that since he was three months old he has lived in Sainz de Baranda and was going to play in the park Retirement. Also, he has lived in Chamberí, a place that has highlighted its cinemas and cafeterias. Resines has also referred to the recording of many of his films and series in locations in the capital such as the Plaza de Ópera or the Casa de Campo. “Living in Madrid is a pleasure and a luxury. It is a magnificent city, we have the best art gallery in the world”, she has expressed.

See also  Shawn Mendes Broke Up with Camila Cabello Due to This 'Singer.'

Nevertheless, has assessed that “the best of Madrid” are “the people of Madrid”, those who were born here, those who came shortly after birth and those who have been in the city for a long time, because the capital is “welcoming, sociable and generous”. “Nobody here feels like a stranger,” she assured. The actor has asked locals and visitors to celebrate the San Isidro Labrador festivities “in moderation and going home for something other than showering and eating something.” “And if you want to flirt, the first thing is respect. Relationships are a matter of two”, he pointed out to those gathered in the Plaza de Villa.

“As a town crier I wish you a great and fun holiday, with a head and caution and I tell you because with what I just went through, nobody better than me”, The actor, who was discharged from hospital on February 10 after spending 48 days admitted to the Gregorio Marañón University General Hospital in Madrid for complications derived from Covid-19, has expressed. To end the proclamation, Resines encouraged all the spokespersons and councilors of the Madrid City Council who were on the balcony of the Casa de la Villa to once again pay tribute to Berlanga by singing together a version of ‘Americanos’ from the film Mister Marshall focused on the people of Madrid.

Upon leaving, the spokespersons for the municipal groups had words of thanks to Resines and also recalled the work that the toilets have done during the pandemic. Specifically, Villacís has said that The actor’s speech and his tribute have been “very exciting” health workers from their “vital experience”. “We take it for granted that we are going to live forever, that we are going to be fine always…”, the deputy mayor pointed out. For her part, the spokeswoman for Más Madrid, Rita Maestre, recalled that the toilets are on strike because “82% of the professionals in the Emergency Department are in a terrible temporary situation”, in addition to the fact that Primary Care “It has only gotten worse.”

The spokeswoman for the Municipal Socialist Group, Mar Espinar, has asked San Isidro for “a mayor who returns the six million euros or the six million euros”, in relation to commissions linked to the sale of masks. Also, he has pointed out that the proclamation has been “very funny” and that “only Resines” could make the entire Consistory sing.

Share
Facebook
Twitter
Pinterest
WhatsApp
Previous articleAnvisa authorizes in-flight service and maintains the use of masks on flights
Next articleWhatsApp is working on a desktop application for macOS
sonu
sonu is a content writer who had worked on various niches. And served many clients. He is a management student also interested in research and marketing. His hobby is writing, reading and sketching. He is also a good orator.
RELATED ARTICLES
Lifestyle