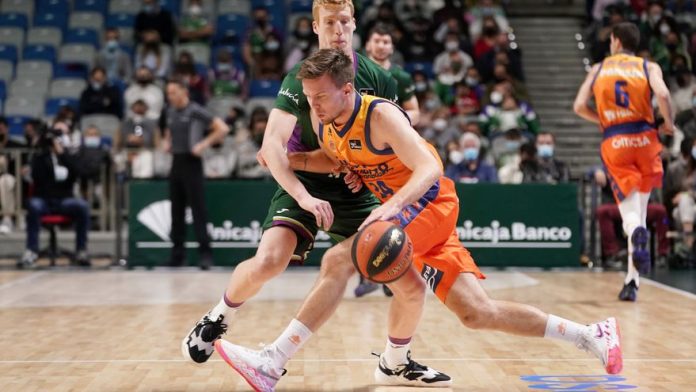 Only 42 hours after beating Lenovo Tenerife, Valencia Basket will return to the fray this Sunday with the mission to extend to 11 the number of consecutive wins at La Fonteta. Joan Peñarroya’s team will face a reborn Unicaja Málaga (5:00 p.m., Movistar+ Deportes 2), in the third of a frenetic series of four games that began on Wednesday in Ljubljana, at eight o’clock at night, against Cedevita Olimpija, and will end on Tuesday, April 5, in the last day of group B of the EuroCup against the Ratiopharm Ulm. The ‘taronja’ group appears at the meeting with the people of Malaga, counteracting the fatigueand the short preparation time, with the good news of having checked on Friday as Martin Hermannsson and Xabier López-Arostegui assumed the points that on Wednesday had been missed in Slovenia. The drop until the next course of Klemen Prepelictogether with the absences of Sam Van Rossom and Nenad Dimitrijevic, forces Valencia BC to readapt trying to convert this weakness into strengths of another kind. Along these lines, Joan Peñarroya warned that, for example, Josep Puerto cannot be required to play a role similar to that of the Slovenian international escort. “Josep should play Puerto, not Prepelic. We can’t ask him to come out of three blocks and shoot,” he recalled, adding later that they must “adapt” their attacking systems to the available pieces. Regarding lowthe Catalan coach was hopeful that “in a couple of weeks” the guards Van Rossom or Dimitrijevic, or both, could rejoin the team, which would give him more weapons for the EuroCup, a competition in which even if there is a signing, could be enrolled.

‘Pinchazo’ of the Baxi Manresa in Santiago de Compostela

In the absence of nine duels for the conclusion of the regular league, the objective of the Valencian team is concentrated on settle in the top 4 of the table before attention has to be divided, forcibly, from April 19-20, with the midweek European qualifiers. To that end, beating Tenerife had substantial value. There is still half a round of the league ahead, but the truth is that the team has come to depend solely on its results to finish fourth, the last of the places that the home court factor will give in the first tie for the title. A position in which Valencia already slept last night after the defeat in Santiago, with Monbus Obradoiro, from Baxi Manresawho has lost the ‘basketaverage’ with the ‘taronja’, and the Joventut triumph in Zaragoza. On Saturday, April 9, there will also be a Direct duel between Manresa and Joventut that will benefit the interests of Valencia BC.

The This afternoon’s game is key to opening a small gap with the Manresans. Opposite, however, the Unibox It will be a hard nut to crack. Arrives strengthened with three wins in a row (Obradoiro, Betis and Bilbao), and much changedin relation to the first round, with new faces like Mooney, Oliver, Kravic and, above all, the ‘coach’ Ibon Navarro, which praises Valencia’s “great capacity” to “compete, despite the problems”. “We have to try to win and, if we do, show that we can be in the fight with the top teams,” said the Unicaja coach, who is three wins from eighth. The preview of the match: Time, television, probable fives and the two SD ‘rosters’