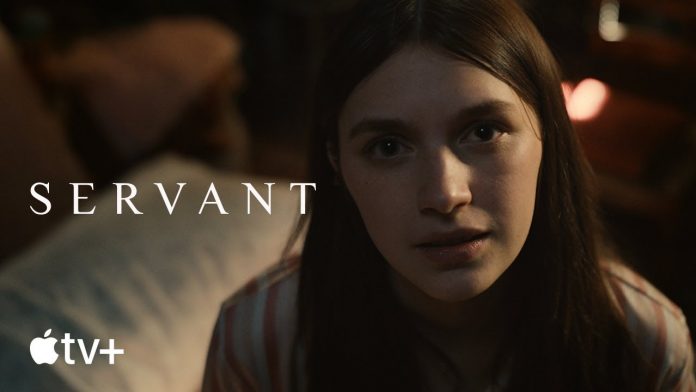 Soon, Servant is making a comeback to Apple TV +. The third season of the psychological horror series by mastermind M. Night Shyamalan (“Unbreakable,” “The Sixth Sense”) premieres on January 21, 2022, as a teaser trailer released today announced.

Watch the first trailer for Season 3 of “Servant” here:

Even after two seasons so far, a lot is still unclear in the mystery horror series “Servant.” In the above Season 3 trailer, the mysterious Leanne (Nell Tiger Free, ” Game of Thrones “) becomes paranoid. She feels persecuted by the members of her sinister sect. Leanne also remembers her “aunt” Josephine (Barbara Sukowa).

The ten new episodes of “Servant” season 3 will appear every week on Apple TV+ viewers can expect a fresh episode every week. New in season 3 is Sunita Mani (” Mr. Robot “), playing an unknown role. The main actors around Lauren Ambrose, Toby Kebbell, and ” Harry Potter ” star Rupert Grint will return.

Servant Season 3: What Can Happen?

As of now, not much is known about the plot of Servant Season 3. In the first season, we got introduced to the lives and stories of Dorothy and Sean. The show became tragic after the arrival of a mysterious nanny into the house. With the arrival of Leanne, many strange things start to happen. Season 1 ended on a massive cliffhanger and some loose ends. The questions raised were more than the questions answered, which M. Night Shyamalan focuses on in his ventures.

In the second season of the Apple TV+ show, the questions remained the same. The second season took a substantial supernatural turn after Leanne returned to Brownstone and revealed her proper form. The season promised a dark and tragic future for the rest of the characters of the show.

Even at the end of Season 2, not many questions regarding the origin of Leanne Grayson were answered. Many twists and turns occur in the story that is still not explained, and it is something that Season 3 will revolve around.