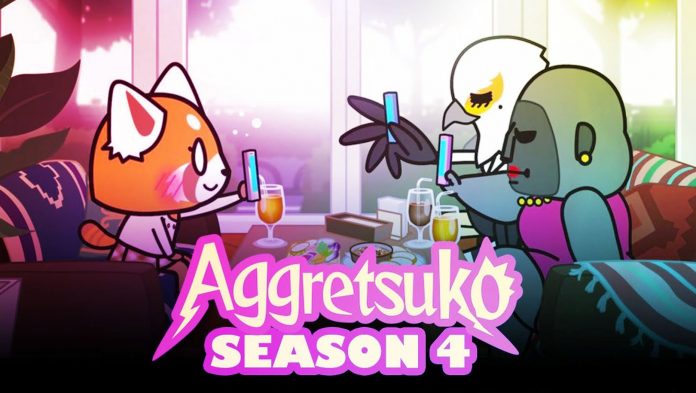 Aggretsuko Season 4 is one of Netflix’s most anticipated anime shows. Netflix just revealed that the new season of Aggretsuko will release in December 2021 on the streaming site.

Fans have grown to adore the protagonist Retsuko and her veiled hostility towards the rest of her working everyday life, making the Sanrio series one of the most surprise anime releases in recent years.

However, as viewers have learned more about her life throughout the seasons, the anime has evolved into a very new experience. An experience that will be continued with a fourth season of episodes on Netflix later this year.

Netflix revealed that Aggretsuko Season 4 would premiere on the streaming site sometime in December 2021 during a special anime spotlight as part of the TUDUM Global Live Fan Event.

Check out the Teaser Trailer:

Fans may start counting down the days until their most awaited Japanese animated comedy series Aggretsuko Season 4 premieres, however, the precise date is yet to be disclosed.

Netflix has also revealed its release date and unveiled its first poster, which teases a mysterious new character. The caption says, “Get ready to rock on with Retsuko in AGGRETSUKO SEASON 4 coming December 2021 only on @netflix.”

Get ready to rock on with Retsuko in AGGRETSUKO SEASON 4 coming December 2021 only on @netflix 🔥 pic.twitter.com/Kfl8lhOM5R

Season 4 of Aggretsuko is also directed by Rarecho and produced by Fanworks. As such, Netflix has officially teased the upcoming season.

“Frustrated with her thankless office job, Retsuko the Red Panda copes with her daily struggles by belting out death metal karaoke after work. After becoming an underground idol to pay off her debts, Retsuko decides to quit OTMGirls and enjoy living a happy, normal life… but just as the company she works for is facing big changes, her relationship with Haida finally begins to move.”

When the third season of the show came on Netflix last summer, it shook things up quite a bit for Retsuko, as she and Haida went through some fairly major relationships over the course of the season.

After great fan anticipation, the last episode suggested that they would eventually try to sort things out with one another and start dating, but we’ll have to wait and see if the two of them can navigate these waters in the next season.

Despite the fact that the writers have remained silent on Aggretsuko Season 4, Netflix’s announcement of Season 4 over Christmas 2020 hints at the narrative.

The official trailer and firm release date are still to be announced. As soon as we receive fresh information, we will share it. Keep an eye for the most up-to-date information on the Japanese anime series.

See also  Yulia Peresild Is Gearing Up To Be The First Actress To Film In Space
Share
Facebook
Twitter
Pinterest
WhatsApp
Previous articleKanye West’s Netflix Documentary ‘Jeen-Yuhs’ to Release in 2022
Next articleWhat Can We Understand from Stranger Things 4 Trailer?